A Space Time! Adventure told on your torso. 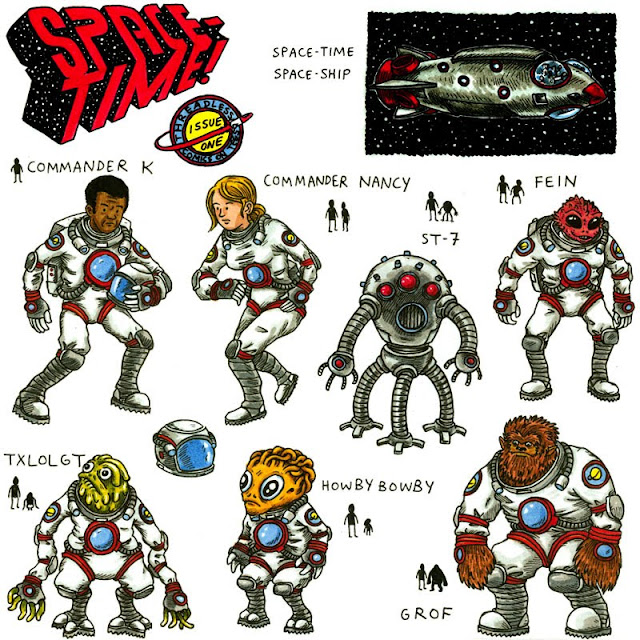 Space Time! is an adventure story never really told, but highlighted in a series of shirts, produced by Threadless. Jeffrey Brown created  and wrote the Space Time! adventures. Artists, Paul Hornschemeier, Jeff Lemire and Anders Nilsen (who created one of my favorite graphic novels, Dogs and Water. I'll review it here, someday) drew the stories to life. Check them out HERE.
Space Time! is the fifth volume in Threadless' Comics on Shirts series. All of the series' can be seen HERE.


Meet the Characters:
Commander Konstantinov: The male human mission commander
Commander Nancy: The female human mission commander
Txlolgt: A small highly intelligent alien who serves as the ship's engineer and mechanic
Fein: a hermaphroditic alien scientist
Grof: A huge furry alien who acts as the team's muscle and heavy lifter
HowbyBowby: A young alien prodigy who leads the team's research projects
ST-7: A robot who records the mission and takes on tasks too dangerous for biological team members
Tee 1: Across Space-Time by Jeffrey Brown
The first issue of Space-Time! established the crew and their mission, ending with them boarding their ship which would launch from earth's moon. Featuring members from most of the intelligent life forms across the milky way, the crew's mission is to travel to and explore the andromeda galaxy.
Front: The team of explorers walk across the boarding gantry to the ship, waving and smiling. Each is highlighted with a close-up shot.
The excitement is tangible as the best scientists from across the milky way begin their historic mission - to travel to another galaxy!
Back: As the team approaches the ship they seem unclear how to open the door to board.
Commander Konstantinov: So we just. Um.
St-7: Here we go.
Txlolgt: Don't put pressure on yourself, that makes it worse.
Commander Nancy: Maybe we're supposed to wait...?
St-7(raising arms): This is going to be great.
Grof scratches his head. 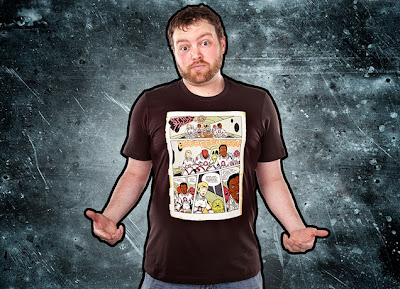