The end of Vigilante. 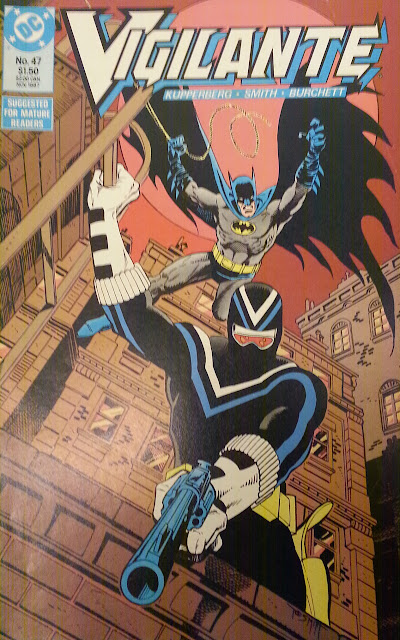 I started reading Vigilante late.
I had always liked the way he looked, like Snake Eyes had left GI Joe and hit the mean streets of New York. I flipped through many issues but it wasn't until issue #47 that I bought the comic. Batman was on the cover. It was a two-for-one, a buck fifty for Vigiliante AND Batman.

Vigilante, AKA Adrian Chase, was a District Attorney in New York City. The mob blew up his home, hoping to kill Adrian Chase, but instead, killed Chase's wife and kids. This pissed off Adrian Chase and he became Vigilante by night, killing criminals.

In issue #47, Vigilante gets a top secret mission from the federal government to take out a Russian spy working in Gotham. Batman finds Vigilante and as the two fight, the Master Detective basically sums up the last 46 issues of the series. Adrian Chase became a judge. As Vigilante, he accidentally killed a cop. Adrian Chase was sent to prison. This was heavy stuff for a comic. 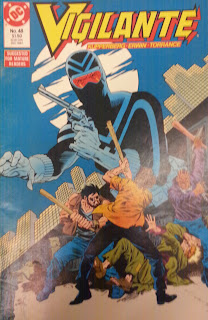 Issue #48 starts out with Vigilante, back in New York, shooting a criminal to death. A Vigilante copycat viciously murders some criminals harassing a homeless man. Adrian Chase meets up with an old lover named, Black Thorn, they have sex. The copycat kills two would-be rapists. Vigilante and Thorn take a shower together. The copycat throws a guy in front of a subway car. This comic is a teenage boy's dream.

Vigilante fit in with tone of the late 1980's perfectly. Action movies like Dirty Harry and Death Wish, which started out in the 70's as social commentary, were firing off sequels that had audiences cheering as criminals were blown away. Hundreds of action films were churned out in the 80's. Characters from R-rated films like Rambo and The Terminator were made into action figures and given cartoons. The action spilled over into reality when Bernhard Goetz shot at four teenagers in New York. The teens had told him to give them five dollars. He was dubbed the Subway Vigilante and lauded on television and radio. 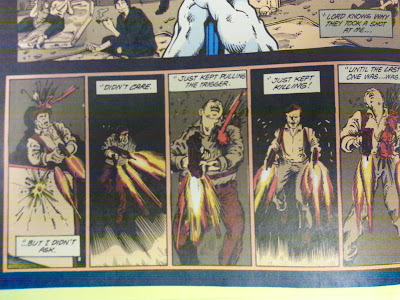 Comic books followed the movies in reflecting the country's dark mood. The Dark Knight Returns and Watchmen are generally considered as the first comics to bring comics out of puberty and into adulthood; but the industry didn't grow up gracefully. As rough as it got, violence was still mostly cool and fun and quickly forgotten.
The Green Lantern's girlfriend was found dead in a refrigerator. Did he suffer PTSD? Batgirl was shot, stripped, and photographed by the Joker. Did she receive counseling of any kind? No, she just changed her name to Oracle and carried on her hero-ing in a wheelchair for 24 years (she is back as Batgirl, in a very well written series). The Punisher was in Daredevil's comic every month murdering the guilty with great style and without consequence. Amidst the frenzy, Vigilante was doing his part to murder the streets of New York into safety. The Vigilante comic seemed to be the same as the others: over the top violence without consequence, to feed the blood lust of teenage boys. 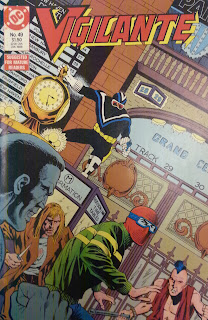 Issue #49. The copycat is called The Homeless Avenger. He is caught by a group of thugs. When Thorn tries to stop them from tearing the Avenger apart, Vigilante stops her. It's the Avenger's battle. The Avenger agrees. Thorn doesn't. Vigilante beats her up for two pages and knocks her out. 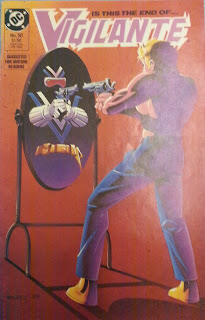 Issue #50 (February 1988). Adrian Chase reads the newspaper. The Homeless Avenger was murdered by the thugs. Chase remembers his own kids and wife. Dead. He remembers past friends and colleagues. All dead. Thorn is bruised and swollen. She tries to argue with Chase and he slaps her. Chase runs off and, as Vigilante, starts a killing spree. He beats up some kids in a movie theater, kills scores of thugs, and accidentally kills a police officer.
Vigilante returns to his apartment and kills himself.
#50 was the last issue. 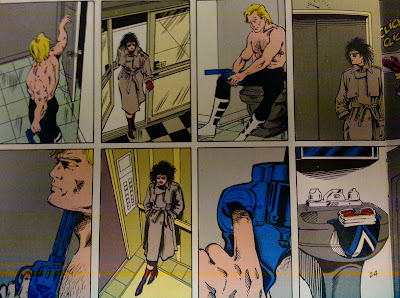 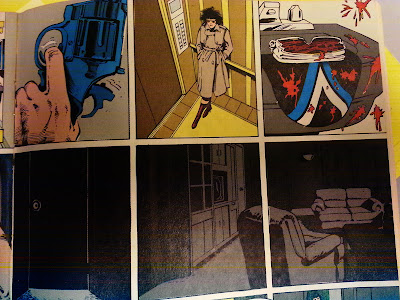 Sure the cover had a little box with "SUGGESTED FOR MATURE READERS," but hey, I had seen a couple of Shakespeare plays, I was 14, I was mature. The most shocking thing about the ending of Vigilante was that someone was writing a comic book story for us. It was not clever and artistic like Frank Miller's take on the Punisher, Vigilante was grimy but overly colorful. Confused, insane, and perfect for a teenage audience. But, none of us expected consequences to all the violence. Comic books ended with bloodied heroes standing over fallen villains, not funerals.

Re-reading the last four issues as an adult, Vigilante is a ham-fisted, grossly simplified take on a serious topic. But as a teenager it tackled these horrible issues with a context and tone that got us talking to each other; about consequences, about suicide, about violence, about protecting the weakest of us, about heroes falling. No one thought Vigilante was cool, hitting his girlfriend, beating up kids, and falling into insanity. I can't look at these issues of Vigilante and say they are immature and simple. It's like saying Dr. Seuss is immature and simple, he only writes for kids.

I'm 40 now. Own a home, married, two kids. After years of free storage, my mom asked me to take the last of my comics, four long boxes, a few weeks ago. I found my Vigilante comics, all four of them. As I finished re-reading them, I noticed that the last panel of #50 has Adrian Chase's gravestone. He died on October 6, 1987. So, on this anniversary, RIP to Adrian Chase. 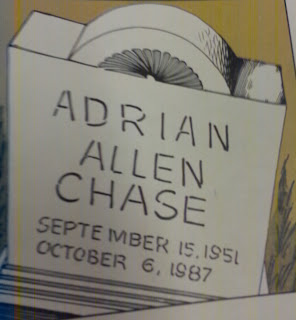 I wrote to Vigilante writer, Paul Kupperberg, via his website but received no reply. I also wrote to Vigilante editor, Mike Gold via his fantastic ComicMix site. He did not respond either. Interestingly, I cannot find anything online where anyone from the creative team talks about the end of Vigilante.

Below is the editorial at the end of issue #50, written by Mike Gold. Click the picture for a larger view. 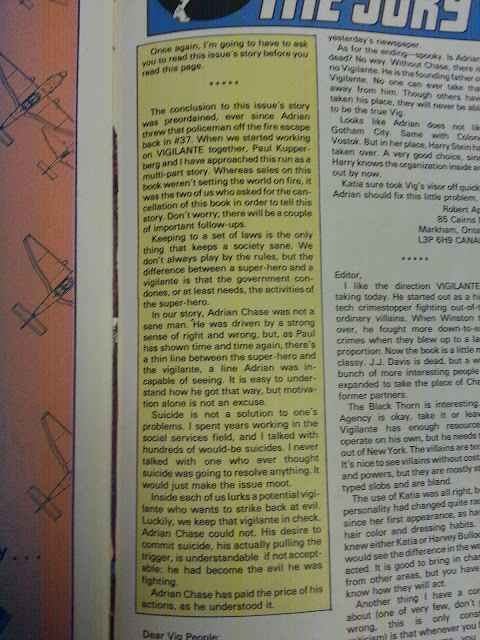 If you cannot read it, it says:

Once again, I’m going to have to ask you to read this issue’s story before you read this page.

*****
The conclusion to this issue’s story was preordained, ever since Adrian threw that policeman off the fire escape back in #37. When we started working on VIGILANTE together. Paul Kupperberg and I have approached this run as a multi-part story. Whereas sales on this book weren’t setting the world on fire, it was the two of us who asked for the cancellation of this book in order to tell this story. Don’t worry; there will be a couple of important follow-ups.

Keeping to a set of laws is the only thing that keeps a society sane. We don’t always play by the rules, but the difference between a super-hero and a vigilante is that the government condones, or at least needs, the activities of the super-hero.

In our story, Adrian Chase was not a sane men. He was driven by a strong sense of right and wrong, but, as Paul has shown time and time again, there’s a thin line between the super-hero and the vigilante, a line Adrian was incapable of seeing. It is easy to understand how he got that way, but motivation alone is not an excuse.

Suicide is not a solution to one’s problems. I spent years working in the social services field, and I talked with hundreds of would-be suicides. I never talked with one who ever thought suicide was going to resolve anything. It would just make the issue moot.

Inside each of us lurks a potential vigilante who wants to strike back at evil. Luckily, we keep that vigilante in check. Adrian Chase could not. His desire to commit suicide, his actually pulling the trigger, is understandable if not acceptable: he had become the evil he was fighting. Adrian Chase has paid the price of his actions, as he understood it.


On May 14, 2013, Paul Kupperberg did an AMA on Reddit regarding his work with Archie Comics. You can read it HERE. He responded to a handful of questions via video. Below, Paul Kupperberg responds to a question regarding comics becoming tonally dark.