The covers of Hara Kiri. 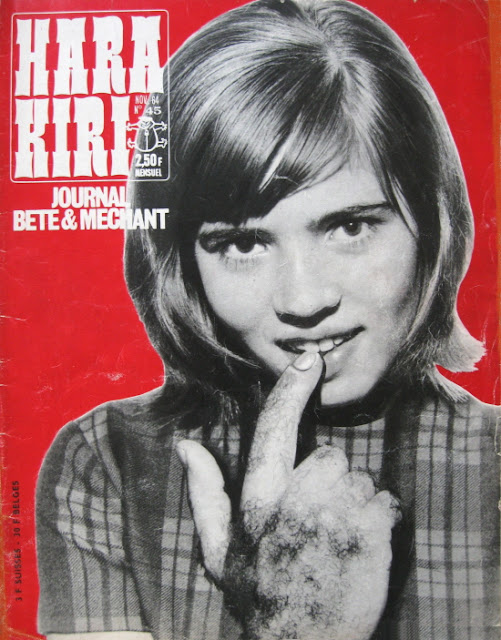 Hara Kiri is a French satire magazine. To be honest, I have never looked inside an issue. The covers are some of the best graphic art I have ever seen, sexual, violent, hateful, ironic, and hilarious. I am posting some of the covers, but in order to get the full, violent, naked bodies, scatalogical, and fun, Hara Kiri experience you should really go look at them all.
The magazine was founded in 1960 by Georges Bernier (aka Le Professeur Choron,) François Cavanna, and Fred Aristidès (aka Fred.) Hara Kiri was nicknamed "Journal Bête et Méchant" (Stupid and Vicious Magazine.) The early  covers depicted cartoon samurai.
In 1961 Hara Kiri was banned from sale and display to minors. As the bulk of the magazine's sales were from newsstands, the ban on displaying the magazine to minors effectively killed sales. The ban lasted six months and was lifted in February, 1962.
In late 1963 they started using photographs on their covers and really hit their stride in terms of branding. 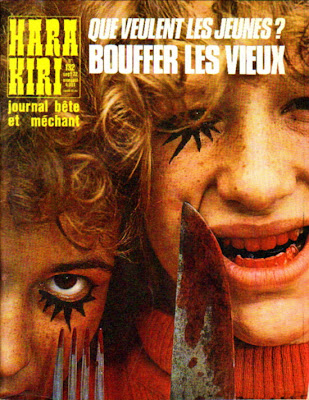 By 1966, the magazine was selling 250,000 copies. This would come crumbling down when the magazine would be banned again for display and sale to minors in June, 1966. Choron, Cavanna, and Wolinski fought for six months to get the ban lifted. Minister Georges Pompidou relented after a letter writing campaign. The magazine reappeared in newsstands in 1967.
The magazine's circulation then ebbed between 80,000 and 100,000 per issue. Many newsstand vendors stopped carrying the magazine due to the headaches the police inflicted, unaware that the ban had been lifted.
A weekly version of Hara Kiri lasted only a year. In 1970 a joke about the death of Charles deGaulle and the deaths of 146 people in a nightclub got the weekly version permanently banned.
While Hara Kiri was profitable for most of it's run, the debts incurred by the group's other pet projects, such as the weekly and a television version of Hara Kiri, grew into a mountain of debt. Hara Kiri was sold to an Italian company in 1986.
Jokes about Nazis and pornographic images got Hara Kiri banned from newsstands once more in 1987.
Hara Kiri died in late 1989. It has been revived a handful of times but most readers of the original are not fans. 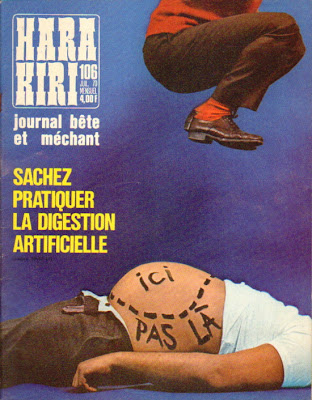 The covers of Hara Kiri are just too good to be true. Sexual and abhorrent at the same time. Mean spirited, funny, and disgusting. Rather than push the buttons of your morality, they smash them with both fists. Something here will probably offend you. I hope so.
If your not impressed by the level of violence or nudity in my selection. A complete gallery of covers can be found HERE. (Clicking on this link will result in your eyeballs seeing images of fake violence and real naked bodies.)
I love the above image of the Clockwork Orange girls. The top image looks almost exactly like the cover of Tina Fey's autobiography. The gallery below has this WTF image of a woman's ass with a knife in her back and a freshly laid golden egg. I don't get it, but it's rather striking, and, hey, free ass. 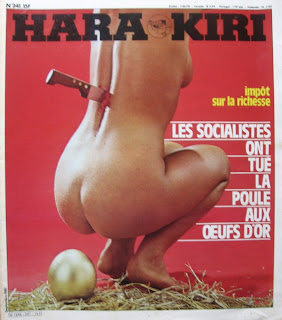 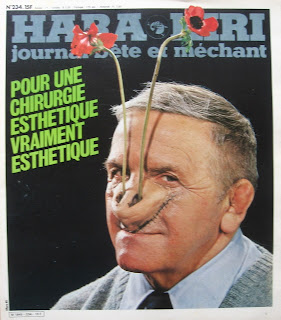 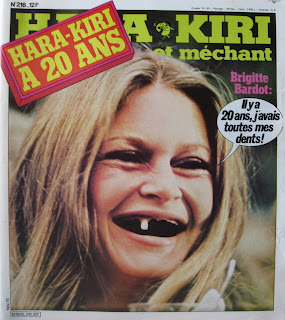 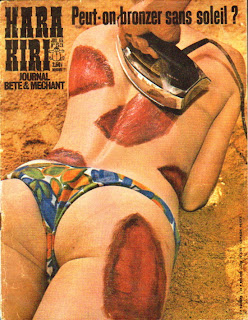 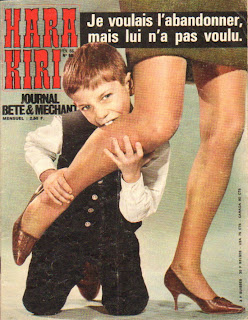 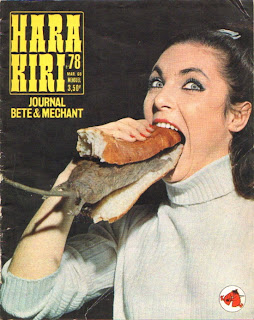 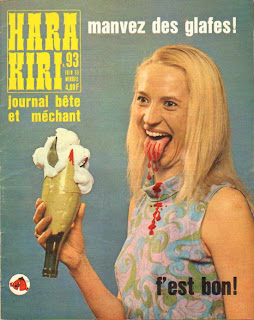 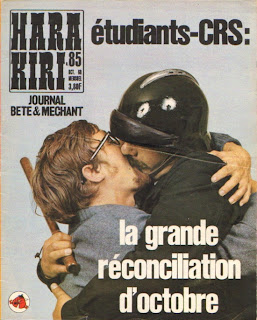 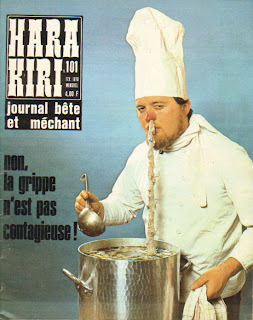 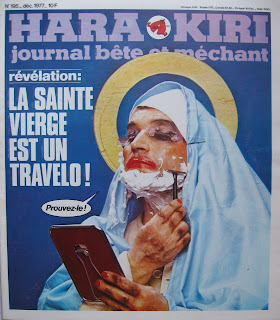 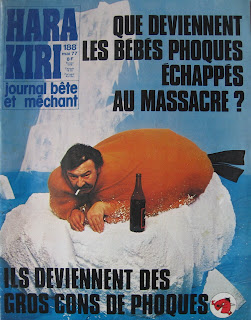 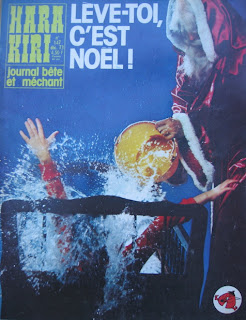 Squirm at the uncomfortableness of this video as you learn how to protect your children from child rapists, courtesy of the Hara Kiri television show. Very creepy, but the punchline is funny.