The History of Universal's Frankenstein Monster. 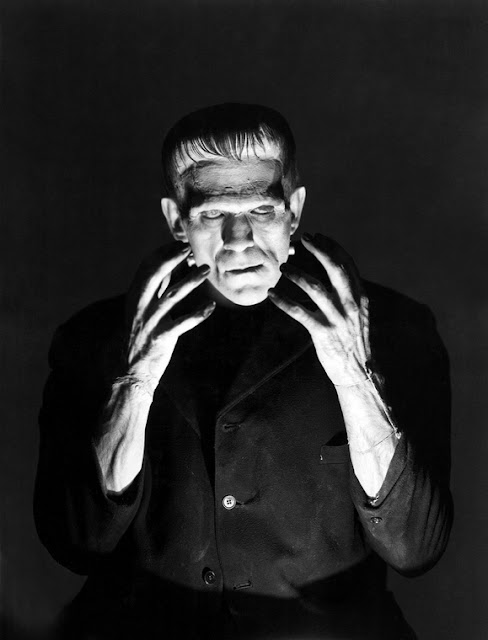 While Mary Shelley's Frankenstein takes place in the 1790's, it can be hard to identify when the Universal Frankenstein films take place. Costumes, cars, guns, and other props were current to the time period each film was made.

According to Frankenstein's second assistant, Karl, the body used for the Bride of Frankenstein died in "1899." Her body was old and Karl had to wipe away a lot of dust in order to read the date on the coffin. This is a solid foundation for beginning to date the films.

As Henry Frankenstein recovered, another of of his old professors visited him, Dr. Pretorius. They agreed to work together to continue Frankenstein's research.


Henry and Elizabeth were married.

Henry Frankenstein and his wife Elizabeth had two sons, Ludwig and Wolf. At some point Wolf moved to the U.S. and Ludwig moved to the nearby town of Vasaria.

Around 1939, the elder Frankensteins died. The elder Ludwig passed the Frankenstein inheritance to his younger brother, Wolf.


Wolf began experimenting in his father's lab and discovered that a sulfur pit lie beneath the lab.
Wolf met Ygor, a local murderer. Ygor had been tried and hung, but somehow lived, living life with a curled, heinous looking broken neck.

Ygor had been taking care of the Monster who survived the destruction of the lab many years ago.
However, the Monster was currently unconscious and Ygor could not revive him. He asked Wolf Frankenstein to help him, to help the creature. Wolf agreed.

When the Monster awakened, only Ygor could control him. The Monster could no longer talk.
Ygor sent the Monster to kill the jurors who convicted and hung him.
The Monster murdered his way through town.

Wolf discovered Ygor's plan and tried to stop him. Ygor attacked Wolf. Wolf shot Ygor.
The Monster discovered that Ygor had been shot and went on a rampage. He kidnapped Wolf's young son.


Wolf saved his son by kicking the Monster into the sulfur pit below his lab.
Wolf Frankenstein, his wife, and his son all returned to the U.S.

Ygor survived being shot by Wolf Frankenstein. A couple months later, the villagers raided Castle Frankenstein and smashed it up. Ygor escaped through a tunnel below the castle.
Ygor freed the Monster from the sulfur pit below the lab. The Monster was weak but gained some power from taking a hit of lightening in a grand storm. The Monster was still weak, though.


Ygor and the Monster went to Vasaria, where Ludwig Frankenstein, the eldest son of Henry Frankenstein lived and worked. He lived with his adult daughter Elsa.

The Monster wandered off from Ygor and caused terror in the town. He was apprehended by the Vasarian authorities. He was put in the care of Ludwig Frankenstein.

Ludwig's evil assistant and Ygor sabotaged the operation and placed Ygor's brain in the Monster's body.
Ludwig realized this when Ygor's voice came out of the Monster's body. However, Ygor's blood didn't match the Monster's and the Ygor Monster went blind.
The Monster killed Ludwig.
The Vasarian villagers raided Ludwig Frankenstein's manor. The Monster smashed some equipment and started a fire. The Monster blistered and burned.


Around 1939, Lawrence (Larry) Talbot returned to his home of Lanwelly Village. Talbot was bitten by a werewolf and lived. He became the Wolf Man.

Larry Talbot was "killed" by his own father and buried. In 1943, two graverobbers mistakenly resurrect Larry Talbot.

Larry Talbot's unconscious body was discovered by police in Cardiff, Wales. Talbot was brought to the nearby hospital and he was attended to by Dr. Mannering. Larry Talbot tried to convince everyone that he was The Wolf Man, but no one believed him. Larry Talbot escaped from the hospital.

Larry Talbot traveled to Vasaria, searching for Henry Frankenstein's diary. He could not find the diary.
Talbot turned into the Wolf Man and accidentally fell into the castle's basement catacombs. He discovered the Monster there. The Monster was not completely blind but did stumble about much more with his arms outstretched. His facial features had also changed.


The Monster did not know where the notes were. Talbot hatched a plan.
Talbot contacted Ludwig Frankenstein's daughter, Elsa Frankenstein, who no longer lived in Vasaria. He needed those notes.

Mannering's plan was to drain the energy from Talbot and the Monster. However Mannering got power crazy and wanted to see the Monster at full strength.
Just as the Monster got to full strength, Talbot turned into The Wolf Man. The Monster carried off Elsa and was then attacked by the Wolf Man.
The creatures fought. Dr. Mannering and Elsa Frankenstein escaped.
A mad villager blew up a local damn which wiped out Castle Frankenstein for good.


In 1944 a man named Dr. Niemann escaped from prison after spending 15 years there. His brother had been an assistant to Henry Frankenstein.


In 1945, Larrry Talbot, returned to Visaria. He came to ask Dr. Edelmann to cure his lycanthropy. Dr. Edelmann was not sure he could.
Talbot, despondent, attempted suicide by jumping off a coastal cliff into the ocean.
Talbot was swept by the tide into a cave which ran below Dr. Edelmann's property.
Dr. Edelmann searched the cave for Talbot. He found Talbot alive. He and Talbot found the Frankenstein Monster, and the corpse of Dr. Niemann, covered in sand. Having a bit of a brain fart, Edelmann confuses an old legend with the story of Dr. Niemann and the monster which occured only a year ago.
Dr. Edelmann also discovered an old dungeon under his house.
Dr. Edelmann brought the Monster to his laboratory and began to revive the Monster. However, he decided that reviving the Monster would be a great danger to mankind and he stopped.

In 1948 a Mr. McDougal, owner of McDougal's House of Horrors had the bodies of Dracula and the Monster shipped in crates, to his location in La Mirada, Florida.
An agent of Dracula, Dr. Mornay intercepted the bodies and brought them to her island castle. Dr. Mornay had the notes of one of the Dr. Frankensteins.

Dracula and the Monster were still alive in the crates.


Dracula wanted to control the Monster by placing the brain of a moron into the Monster.
Dr. Mornay seduced a local baggage clerk named Wilbur out to her island castle.
Larry Talbot, had followed Dracula and the Monster to Florida and attempted to save Wilbur with Wilbur's friends. However, he turned into the Wolf Man.

The Monster received an electricity power boost as Dracula and the Wolf Man fought.
The Monster murdered Dr. Mornay.
Dracula turned into a bat and attempted to fly away, but the Wolf Man grabbed him and they both fell over a balcony to some rocky seas below.

While Wilbur and his friends attempted to flee. The Monster chased them to the island's small dock.
The dock was set on fire and the Monster burned. The pier collapsed and the Monster disappeared under the water never to be seen again.

So, somewhere off the coast of Florida, the Monster still lies. Unless he was hit with a random bolt of lightening. He may be stomping around the swamps somewhere.

There are a ton of continuity errors between these films. This little story constitutes a best effort on my part to reconcile, ignore, and steamroll over some of the glaring inconsistencies to create a viable and coherent eight film epic.

Thanks to my buddy, Vince, for help with research.
I swiped all of the pics from various places on the intergalactic network. One sweet resource for information and pics is the Classic Horror Film Board. A user there, with the handle Rakshasa, has been unendingly kind enough to post a pile of wonderful Universal stills.
Posted by Emerson M at 12:36 PM