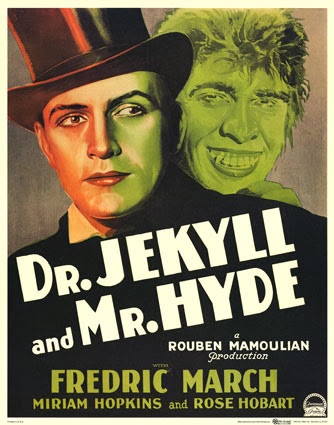 I'm not sure how fans of the original Robert Louis Stevenson book pronounce his name, but I was surprised to hear the characters in this film refer to Dr. Jekyll as "Jeek-il". I never knew. For some reason this horror classic escaped my eyeballs. I grew up with a book that had hundreds of frames from the film printed with the script (released by Picador Books) and consequently knew the film inside and out, but I had never actually seen it.

My wife and I remedied this deplorable condition and were amazed at how good Dr. Jekyll and Mr. Hyde is. I was surprised how much the film smelled like David Lynch's Blue Velvet. Good and evil splayed and divided into clear black and white. Both Dr. Jekyll and Mr. Hyde and Blue Velvet skate that thin line between realistic, familiar, open-jawed concern and horror, and cartoonish extremes. The first time I saw Blue Velvet I was horrified and had trouble breathing when Frank Booth was on the screen. The second time, I just couldn't stop laughing at his insanity. While Mr. Hyde's inhumanity is similar to Frank Booth's, it is mostly talked about and hinted at. A remake, starring Spencer Tracy as Mr. Hyde was made ten years later, but it was watered down by the Hayes Code's restrictions on motion picture's violent and sexual content, which went into effect in 1934. 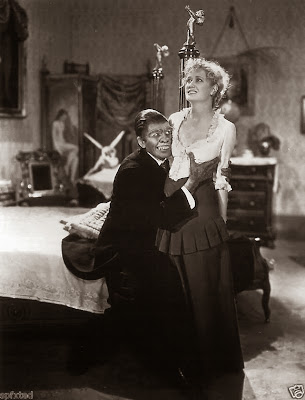 Frederic March went on to win a Best Actor award for his portrayal of Dr. Jekyll/Mr. Hyde at the 1931 Academy Awards. His performances were pitch perfect for each character. March's Mr. Hyde not only looked like a de-evolved monkeyman, but the dialog made it clear he was a rapist and sexual sadist. Rough stuff.

Not only was the implied violence through the roof, but this film had side-boob shots all over the place. The sexual innuendo and the amount of shown flesh was surprising for the time.

My understanding of early sound motion pictures was that the loud sounds of the camera required that it be housed in large sound-proof cells, limiting its mobility. Not in this picture. The camerawork in Dr. Jekyll and Mr. Hyde was top rate, ranking up there with D.W. Griffith's Sunrise and other films acknowledged as silent film classics for their stunning camera work. This camera not only moved but pulled off some effective P.O.V. work as well. Stunning.

The lighting and makeup effects were amazing and clever. Way ahead of their time. The first Jekyll-to-Hyde transformation effect may baffle some viewers today.

Dr. Jekyll and Mr. Hyde was a very happy surprise. I could see the film as a perfect gateway for those not so interested in classic horror films, but wanting to dip their toes. Go find a copy.

If you can't wait, you can watch the incredible first change scene below.


(Photos from the amazing Classic Horror Film Board.)
Posted by Emerson M at 6:00 PM No comments:

The Yellow Girl
Mixed media on un-stretched canvas. 21”x61”
Posted by Emerson M at 7:30 AM No comments:

Hansi, the girl who loved the swastika. 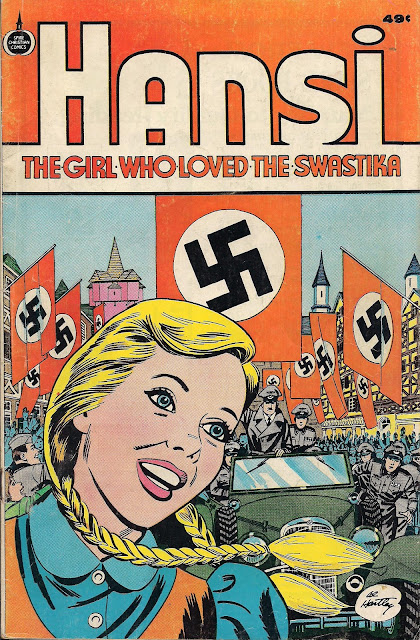 Forget all the EC reprint comics in my collection.  This is the creepiest.

Created by Al Hartley for Spire Christian Comics, Hansi, The Girl Who Loved the Swastika, tells the story of a young, idealistic German girl who believes, wholeheartedly, in the Nazi way of life and HATES the bible. 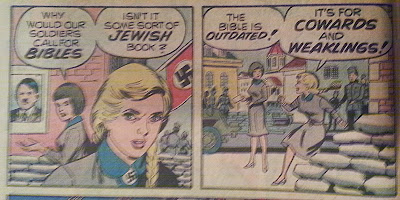 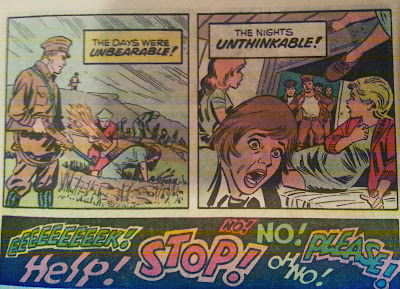 After being abused by Nazis and Russian soldiers, Hansi runs into some wonderful American soldiers who take care of her.

Hansi learns to love the bible and moves to America.  She and her family board hippies and teach them to get high on religion instead of on doobies. 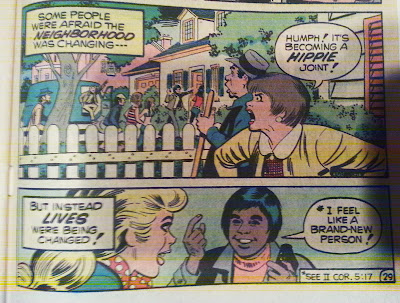