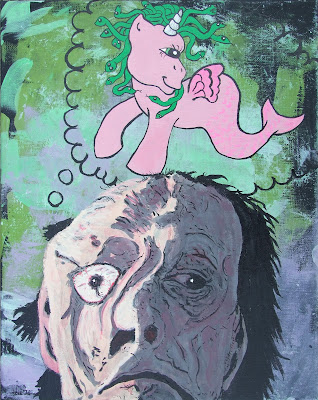 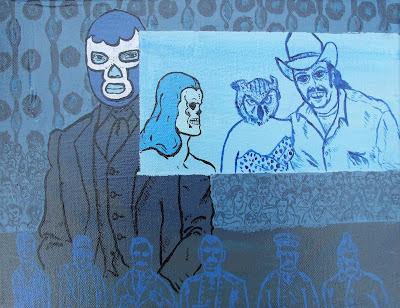 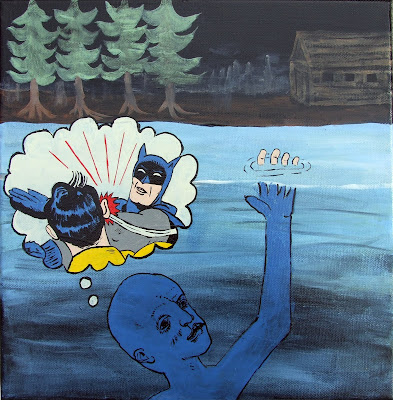 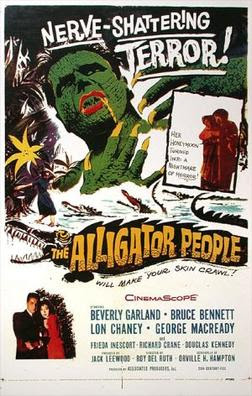 I was destined to love this movie.
I always loved the stills from The Alligator People in all my monster film books. The Lizard, who first appeared in Amazing Spider-Man #6, is a virtual rip-off of this character. Croc-Master has always been my favorite character in the GI-Joe universe. I love the late Universal horrors more than the early ones (yeah, I'm a cretin, so what?)

The story starts with a woman, Joyce, being hypnotized by her employer/doctor. She relates a strange story regarding the disappearance of her husband on their wedding night. She follows the one lead she has on her husband's life and finds out that her dear hubby has been a bit transformed. He is now a half-alligator, half-man creature. He flails around in the swamp a bit. Fights an alligator. Drowns in quicksand. The woman's doctor/employer does not tell her about the story she has revealed to him under hypnosis as he does not want her to fall of the wagon of sanity.

The first hour of this picture (it's only 74 minutes long) works as a pretty good mystery piece. Almost a film noir in the bayou. I doubt if the film was ever a truly scary horror movie, but you could file it under weird horror.

Joyce's husband, Paul, receives a telegram and his intensity is pretty startling. He leaves the train they are on to use the pay phone on the station platform. The film is pretty good at transferring Joyce's panic as the train pulls away from the station, leaving Paul behind. The actress playing Joyce is especially good throughout the movie. She's not a starlet, not super hot, and I appreciated that. Paul's intensity is also really cool. You really wonder what the hell he's so worried about and who has such a grip over him.

There's a scene where Joyce hears someone playing a piano and follows the sound that is particularly well lit and staged.

Lon Chaney Jr. is great as well. Whenever I see him, I get this weird nostalgic, sad feeling. He always seems like such a damaged soul. I know he was a major drunk, and maybe something about his voice, and his eyes, and the fact that he is and always will be Larry Talbot to me, he just evokes a huge amount of pathos from me whether his character is asking for it or not. Like I said, he's great and lovable here as a reptile hating, attempted rapist, drunk, anti-technology, Ted Kaczynski-like, caretaker. He runs over an alligator with his truck and says, "Anyway, baby, we didn't do him no harm."

The movie drags a bit around the one hour mark when all the explanations become necessary as to what's going on. Then the action gets hot and greasy and the movie abruptly ends. Paul dies. The heroine loses. But, she doesn't remember a thing, so no harm done to her either.

The music is good, stock, 50's horror movie. It is particularly effective when it mixes with the sound effects near the end, in the laboratory.

The makeup effects. Well, I'm sure you've seen the photos if you're looking around the web for info on this movie. The mask is very inanimate, but very cool looking. The body suit is kinda lame. The earlier makeup effects are good.

Buy it or rip it?
Buy it. Man, for $3 new from an Amazon seller, it's a good one for your collection. 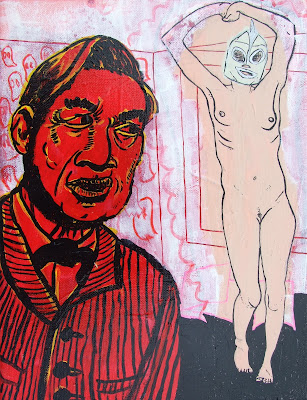 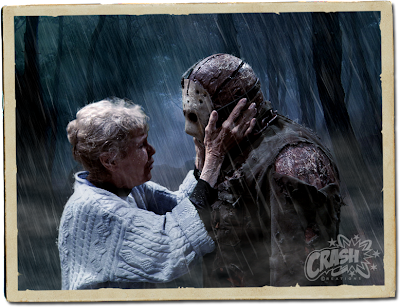 Stolen. Incredible image, says so much. Taken from the Crash Army HQ.
Posted by Emerson M at 10:38 AM No comments: 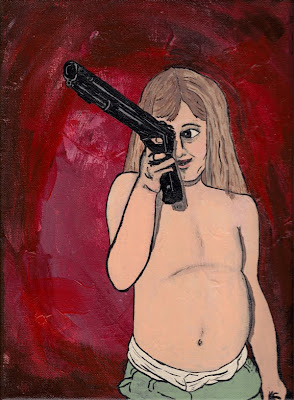 I don't know what the hell this painting is, but I did it.
Posted by Emerson M at 4:56 PM No comments:

Email ThisBlogThis!Share to TwitterShare to FacebookShare to Pinterest
Labels: painting 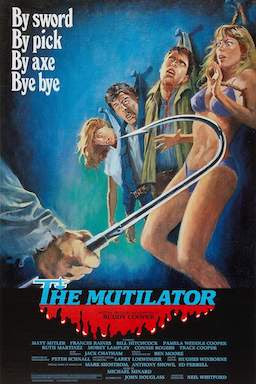 If you're an 80's slasher fan looking for the proto-typical slasher storyline, this is a great hidden gem.
The Mutilator is the single house - teen/college friends out of the protection of "adults" - friends each go outside one at a time to die - type of story. It could be held as a model of the genre.

A kid accidentally kills his mother. This drives his dad nuts. Years later when the boy is in college, he and some friends head out to his pops' beach house to help clean it up. They think the dad has moved back to his primary place of residence, but no. He's in the damn garage! The film shows this straight up, so it is no surprise that the father is the killer. He kills most of them, one by one, and dies a grizzly death at the hands of his son and his son's virgin lover.

The acting is horrible. Genre defyingly horrible. The lighting is super dark. Tiny bit of nudity. The kills are actually really well done and brutal. The father's death at the end is awesome.

Just be sure to watch it in a dark room as it is a very dark film.

Rip it or Buy it?
As far as I know there is no NTSC release of The Mutilator. You're going to have to rip this one or scrounge up the old VHS.

Email ThisBlogThis!Share to TwitterShare to FacebookShare to Pinterest
Labels: Rambling Review, The Mutilator

A bird crapped Alan Moore on my car. 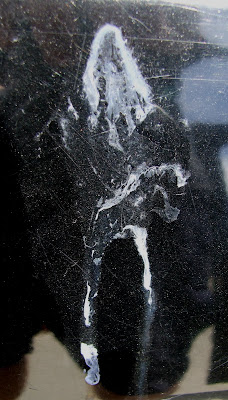 A bird crapped Alan Moore on my car.
Posted by Emerson M at 8:58 AM No comments: 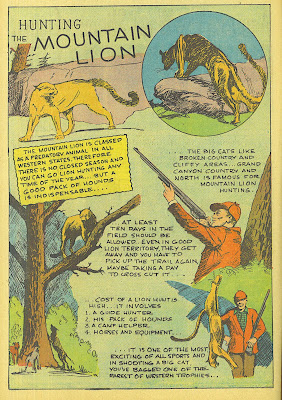 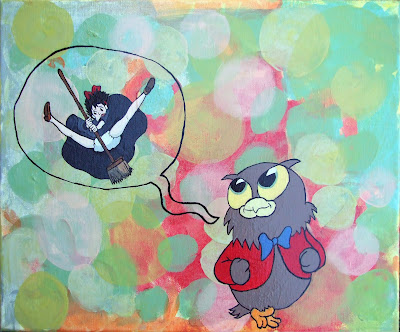