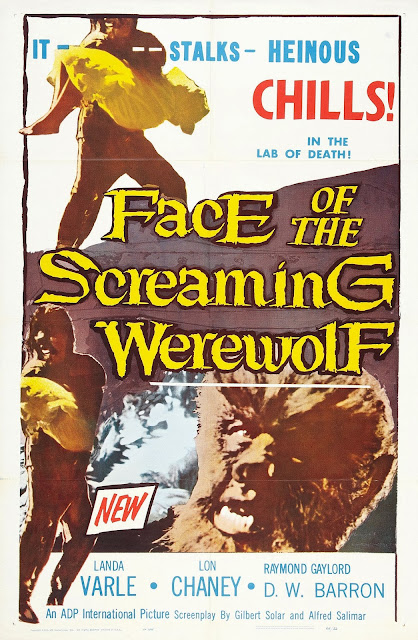 Face of the Screaming Werewolf.

OK, FINE, I'll admit it. I've had a strange sort of crush on Lon Chaney Jr. since I was a little kid. He has always seemed sad to me. Living in his father's shadow, bitten by a werewolf, those sad eyes, he was a serious lush, brought to making films in Mexico for pennies by the end of his career. I just want to hug him. And his voice, it just melts me. It's so sad.
Anyway, this film is an American re-edit, re-dub of Casa del Terror, a Mexican film starring my wife's favorite comedian, Tin-Tan.
An archeologist finds two mummies. The mummies are brought back to civilization and one runs amok. When the full moon shines brightly in the sky, the mummy tears off its bandages to reveal that it is a WEREWOLF MUMMY!!! Sounds cool, but it's actually painfully boretastic.
Poster courtesy of Wrong Side of the Art.
Posted by Emerson M at 9:26 PM