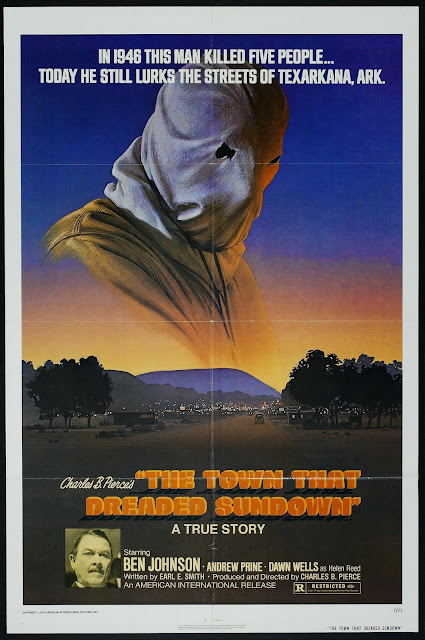 The Town That Dreaded Sundown.

This almost-slasher film was based on the real Phantom Killer Texarkana Moonlight Murders in 1946. I have yet to read about the murders so I am not sure how accurate the film is. I sincerely doubt the actual killer tied a knife to a tuba slide and played the tuba behind a tied up woman, stabbing her to death. So bad.

The film had some really good qualities. The killer looked amazing and terrifying. The film came out in 1976, two years before Halloween and six years before Jason swiped his look in Friday the 13th part II. The action sequences were tense as the killer was not slick or agile, being tossed around and struggling with the victims. Mary Jane from Gilligan's Island has one particularly harrowing scene that goes on forever as she struggles and fights and flees. The victims are not teeny-boppers eager to die.

The ending was a bit anti-climactic, but after the credits ran, I was satisfied and interested in the real case. The crimes, as portrayed in the film, felt a lot like the Zodiac killings in the 1960's and 70's. The movie was essentially a Texas 1946 version of  the 2007 Zodiac film. The story follows the police investigation. The plot of the film is not the plot of a slasher film 'Who can survive the killer?' it is 'Can the police catch a killer?'

There are some extremely out of place and horrible comedy moments in the film. The director plays a bumbling, rookie cop, and just ruins every scene he's in. There is a pointless narration which runs throughout, attempting to pull the film into the hard nosed detective, film noir, genre. The tuba killing attempts to be weird and comes off as unrealistic and weak. The final scene takes place in broad daylight which doesn't make a lot of sense and hurts the credibility of the characters. I also don't understand why trains are this unstoppable moving force in films. How many gunfights start in, on, and around trains and the operators of the train don't stop?

If you like the ultraviolence, this has a little, not a lot. If you're in the mood for a good old fashioned crime drama, set in Texas, with dates and times and stakeouts and pushy press and weird side characters and Texas Rangers and a tricky killer, this is a winner.

(Poster courtesy of Wrong Side of the Art.)
Posted by Emerson M at 6:00 AM