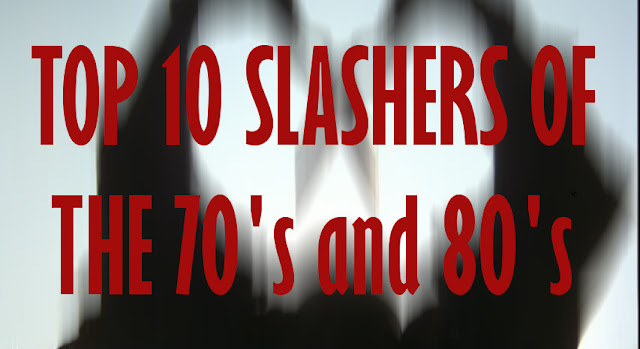 Maybe you've seen some of the Platinum Dune remakes of classic slasher films and want to see the originals. Perhaps you remember being scared to death as a kid of Jason and Michael from TV commercials and schoolyard talk, but never got to see the actual films. Maybe you've seen a few of the films and want MORE. Whatever the reason you've come, welcome to slasher school. I have a full course load for you.

This actually isn't just the top ten slasher films: I've got prerequisites for you and even some extra credit. You're going to get twenty-seven films for the price of ten! Do you feel lucky, or just sick?

Like any class of this type. These are my recommendations, if you are a slasher fan and disagree, please write some alternate credit choices down in the comments.

The slasher genre seed was planted in 1960 with Peeping Tom and Psycho.
It was lovingly watered with gore in 1963, with Blood Feast.
The genre was given form by the Italian giallos from the 60's and 70's, starting with 1965's Blood and Black Lace.
In 1974, Black Christmas sprouted and the first slasher as we recognize them today, was recognized.
Shortly afterwards, in 1978, Halloween was released as the artistic prototype by which all other slasher films would be judged. 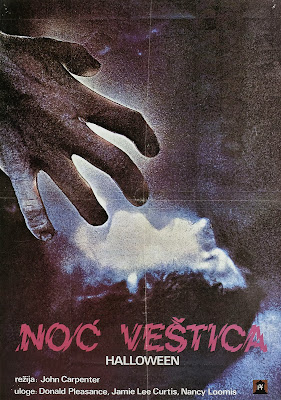 Grading.
When I watch a slasher, I'm looking for these factors, mostly in this order:
Pacing, story, lighting, music, how cool is the killer, frequency of kills, quality of kills, camerawork, nudity, production, acting.

My notes reflect the film's inclusion onto their respective list. For a quick summary of the film, look at my big chronology list of slasher films HERE (and if you have any films to add to that list, please do let me know down in the comments of this post.) 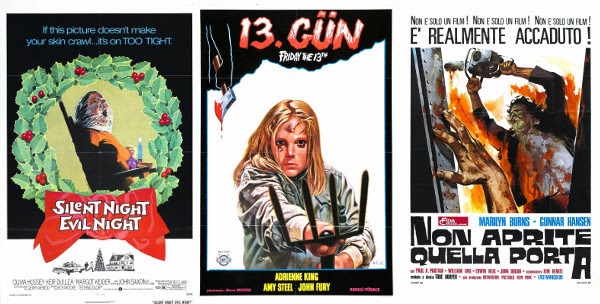 Prerequisites
Ezra Pound said there are Innovators, Masters, and Imitators. These films are from the first two categories. Your prerequisite assignment is to rush out and see the staples of the genre:

General Ed
I recommend watching these in this order. This is a real mix of films to get your brain coated with all the possibilities within the genre. 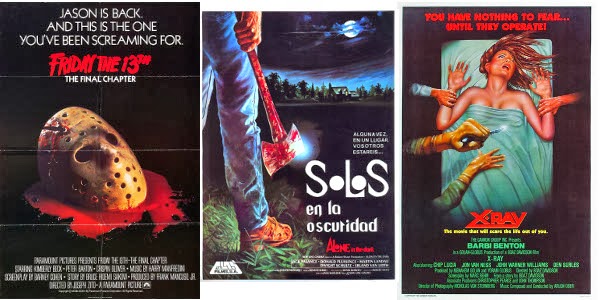 Electives
Here are are ten more tasty morsels for your eyeballs and earholes. These are all good films and you could add the many and varied Halloween and Friday the 13th sequels to this list.


1. Alone in the Dark (1982) - Spooky and helpless and scary with A-grade actors.
2. Edge of the Axe (1988) - A small town love story in the midst of a slasher film.
3. The Toolbox Murders (1978) - No story, no characters, just killing.
4. Don't Go in the Woods (1982) - Bottom of the barrel. WAY ahead of the time in terms of camerawork. The awful dubbing makes it hard to watch.
5. Sleepaway Camp (1983) - Kills are so creative that the product suffers. Fun film. Most would rank this higher. Amazing ending.
6. The House on Sorority Row (1983) - Good solid film.
7. The Slumber Party Massacre (1982) - Good solid film.
8. Pieces (1982) - Just test the waters on the Italian productions. If you like the slightly off way of storytelling, you may want to dive into the Italian Giallos.
9. Madman (1982) - Fun, rural slasher.
10. Eyes of a Stranger (1981) - Rear Window retold as a slasher. Good stuff.
You've done it. You have earned the right to call yourself a slasher film fan. I don't know what kind of sick achievement that is, but you've filled your head with a lot of wonderful garbage.

For an advanced degree, you'll need to see most of the films on my list of Slasher Films of the 70's and 80's. You'll want to watch them multiple times; establish a position on the Freddy's and Chucky's as whether or not the should be on the list; you'll want to dip your toe into giallos to see what that is all about; and most of all, you'll want to develop your own criteria, and make your own list and slap it down in the Comment section.

(Posters courtesy of Wrong Side of the Art.)
Below is Mondo's poster for The Burning. Stunning. 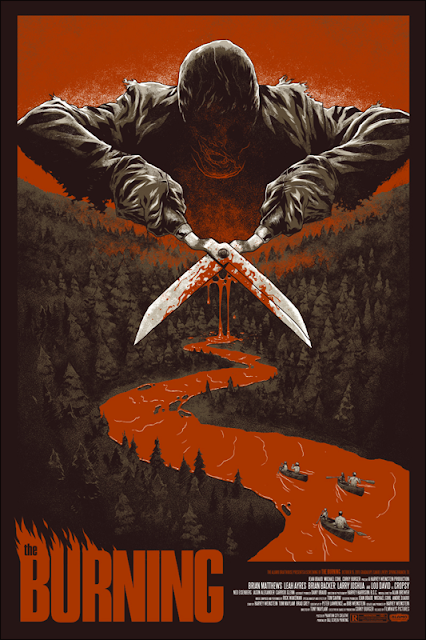