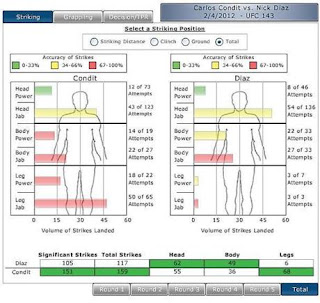 The Boston Globe has an interesting article on the Moneyball-ization of mixed martial arts fighters. The article is HERE.
The movement from Martial Arts to Martial Sciences strikes me in a negative way. It knocks at tradition and attempts to explain something we don't necessarily want explained. We were fine, for thirty years, not knowing that mitichlorian levels determined a person's ability to control The Force.
The article hits back at these base emotions:


...when people worry about the effects of quantification, they’re worrying about something that has already happened. Nineteen years ago, at the dawn of the sport, matches only ended when one fighter knocked the other one out or forced him to submit. Today most fights end with a state-appointed judge’s decision and a hug in the middle of the ring.

Fighters are not really fighting to win a fight. They are fighting to win a UFC (or other company) sponsored, state sanctioned, hand to hand contest.
To do this, fighters cross train in striking, grappling, and conditioning. As much as some fans want them to be two dimensional, sole representations of a particular discipline, it cannot be the case anymore. Fighters need to score points.
In a hundred years, when MMA has become the same as professional wrestling was in the 1960's, someone will come along and want to see a 600 pound ninja fight a 'roided out kenpo kung fu expert.