Daily poster: Dawn of the Dead. 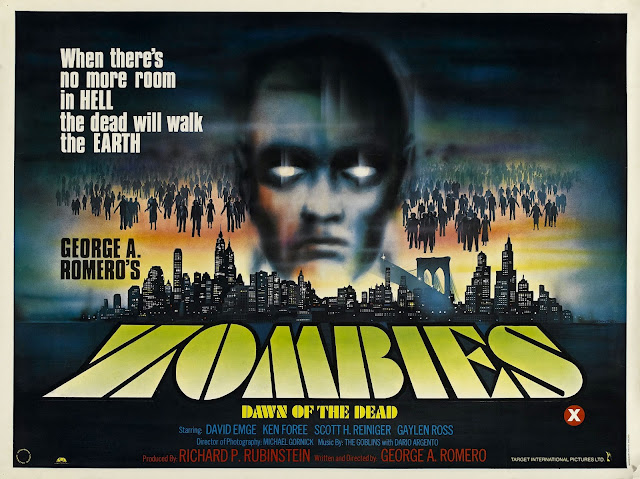 The film opened on April 20, 1979 in the United States. It had opened eight months earlier on September 2, 1978 in Italy, under the name Zombies. The Italian version of the film is ten minutes shorter and has a few different music cues.

Dawn of the Dead (hereafter, DoD) is my favorite zombie film. It barely makes the helicopter blade to the top of the head over Night of the Living Dead. The remake of Dawn of the Dead is my third favorite. Tom Savini did the makeup effects on DoD and wrote about it in his masterpiece of non-fiction, Grande Illusions. Like all of the films in that book, I read about DoD, studied the makeup effects, and knew just about every act of violence, well before I was able to see the film. When I was old enough to see it, I was gleefully gutted. The film is a masterpiece of horror cinema.
The story follows two employees of a local Philadelphia television station and two Philadelphia SWAT cops in their effort to survive a zombie apocalypse. The group finds a newfangled indoor shopping mall and sets up camp inside. They do pretty well securing the location until a group of chaos injected bikers screw up everything.

The first third of the film sets a dark tone. Humanity can beat this if we would only stop screwing around and focus on the issue. Some heavy things happen, but the first act ends with some light.
The second act adds kindling and is uncomfortably light in tone. The group of four are making a go of it all. They are managing to keep control of their surroundings. The kindling catches fire.
In the last act, however, humanity catches up with the group's good intentions. Moments of impetuousness turn disastrous, infighting, cockiness, and greed take a boot and stomp out the fire. The end of the film burns like a match in the wind.

Director, George Romero's style is finely clunky. The 70's color palettes and realistic design add a foreign sort of feel. The film is not a slick Hollywood production, the costumes and sets feel real. They probably were. The film also has those 1970's independent film moments of randomness that create a realistic, chaotic mood. Dialog overlaps. Characters sometimes do things that are seemingly random or sudden. They don't talk about everything before they do it. A goofy smile, an explosive emotion (both positive and negative,) unexpected choices. All these elements make DoD endlessly re-watchable and fresh.

And the mall. There's just something about having run over a whole mall, that appeals to the kid in a person. Being where you're not supposed to be, when you're not supposed to be there. When I'm feeling dark, the lighter scenes in DoD almost bother me. But, the teenage thoughts of having a mall of zombies to hack up in relative safety brings me back and makes me feel warm and cozy.
It may sound sick and a bit too timely, but taking over a zombie infested mall with my friends and a bunch of guns is my Thomas Kincaide painting.

There are a million little anecdotes about the film: The brightness of Savini's blood recipe; the alternate ending; the actual screams of a zombie victim when the zombie actor bit too far on a makeup appliance; how they shot the film at night while the mall was open during the day; Italian director Dario Argento sequestered Romero away in Italy, while Romero wrote the script; the kid zombies in the film do not shamble. They RUN!; the film was released in the U.S unrated as the MPAA had given it an X. These anecdotes are interesting, but superfluous. The DVD sets all have "making of" features and endless amounts of extra material, but like Night of the Living Dead, the films stand on their own. Looking behind the curtain doesn't necessarily add value.

"When there is no more room in Hell, the dead will walk the Earth." Good times.