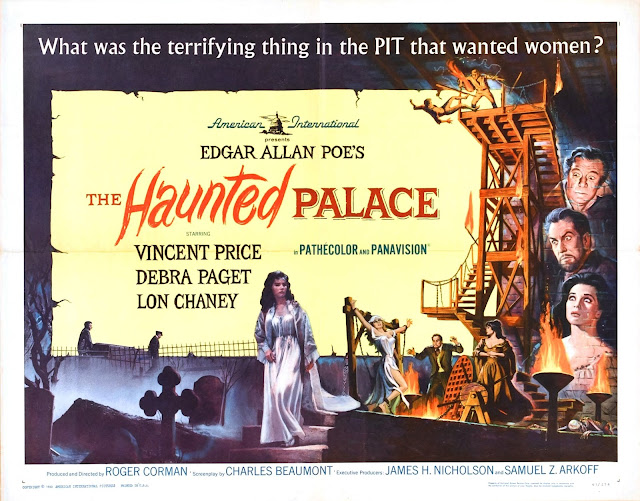 The Haunted Palace.
Roger Corman's film version of H.P. Lovecraft's novella, The Case of Charles Dexter Ward. Distribution company, AIP, changed the name of the film to The Haunted Palace to fit the film into Corman's series of Edgar Allan Poe films. The only relation the film has to Poe's poem is the title and a few lines of voice over at the end of the film.

The Haunted Palace is Corman at his finest. The sets are clever and grand. The script is well written (I've heard that a young Francis Ford Coppola actually had a stab at cleaning up the dialog.) The acting is a bit punchy and melodramatic, but all right. Vincent Price is enchanting. I'm a huge sucker for Lon Chaney Jr. too. I just want to hug him; he makes me feel so sad. The villagers are fantastic. Leo Gordon is intense and raving. Big eyed Elisha Cook Jr. fosters the fear that Leo Gordon turns to hatred. A terrific group of actors.

The film is slow. This would be a prime candidate for a remake. Liam Neeson in the Price role.
I watched the film on DVD recently. I had only seen an old, crappy VHS of the film. On the DVD, the actor's makeup looks horrible. Grey-green against the actors flesh hued necks. Does not look good.

If you're an H.P. Lovecraft whore, like me, you have to see the film. Just to hear someone say Cthulhu and Yog-Sothoth in a film made in 1963 is thrilling.

Poster courtesy of Wrong Side of the Art.
Posted by Emerson M at 9:43 PM