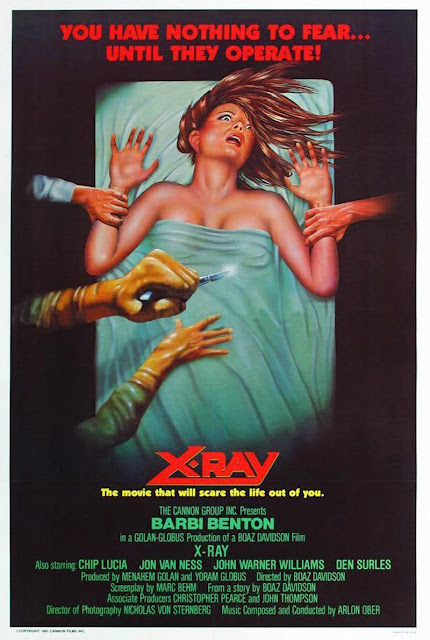 Hospital Massacre is one of my favorite tier-2 slasher films. I saw it when I was younger and was deliciously horrified. Honestly, I thought Barbie Benton was first class Hollywood royalty. I just didn't know who she was. I couldn't understand why this famous movie star would be in a slasher film. Well, she gets pretty naked in the film and I was completely blown away, thinking I had discovered some secret movie. HA.

Hospital Massacre opened thirty years ago, sometime in April 1982. I cannot find the exact date.
The film has some tonal consistency issues. Surrealistic comedy is thrown in to the film at a couple of points. These pit stops are confusing and if you can't ride these out, the film breaks down. The motivation of the killer is a big stretch as well.

That all being said, the film has some good slashings and a curious plot that resonates like a nightmare that you can't escape from. Most slasher fans would probably disagree with me, but I think it is a fine entry into the slasher genre.

I can't find a trailer for the film, but here is the entire movie, Benton boobies and all. The only available versions of the film that I know about, are sourced from old VHS tapes. The quality isn't going to get much better than this.