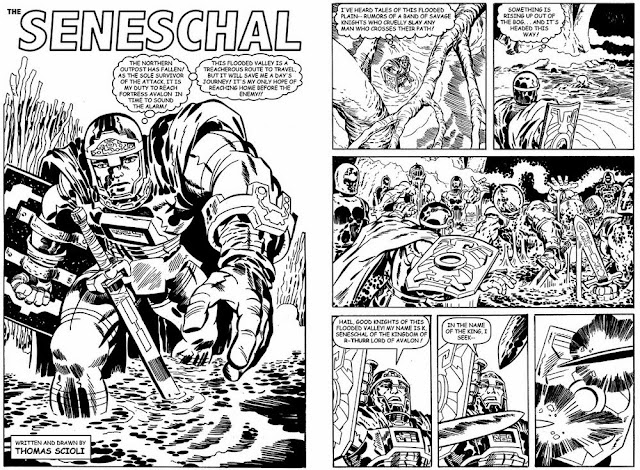 I wrote a post regarding Tom Scioli's Seneschal last week and promptly emailed Tom regarding my enjoyment of said work. The Seneschal story he posted was reprinted from Popgun Volume 4. The story is ten pages and moves quickly. The art is crisp and detailed. The pallette is beautifully milky, with browns, greys, and yellows.
American Barbarian is his ongoing, post-apocolyptic, online, comic series. He updates pretty regularly and the story is action packed and fun.
I asked him six questions and he graciously replied:


1. I loved the 10-page Seneschal story you posted on the American Barbarian blog. The story is simple and the art is Kirbytastic. Can you tell me a little about the Seneschal character?
He's from Aval-One, the kingdom of R-Thurr. He's the seneschal of R-Thurr's lands, which is usually a boring job, but occasionally it calls for him to settle strange disputes that pop up on the kingdom's borders on R-Thurr's behalf.


2. What is the future of Seneschal?
I created him at a time when I was very obsessed with the Arthurian legends. Although I'm still a fan, my interest in them has cooled somewhat, so I don't feel the need to do more stories. I've done three total. I also found it to be a fun character to work on because I had a god-like character in 8-Opus, and I wanted to tell some stories about a character who depends on his sword and his wits instead of vast cosmic power. Right now American Barbarian is scratching that creative itch. You never know, though. I might wake up tomorrow with a story in my head that can only be told in a futuristic Arthurian milieu.


3. What are your short and long term plans for American Barbarian? What is your fantasy as far as that character and universe?
I have a large story that I'd like to tell, that will be collected in one volume. After that I have plans for two sequels, but I'm not sure if I'm going to do those immediately after I finish this first book, or if I'll work on some other concept next. My main goal is to tell a really compelling and complete story that will be a perennial, always in print.


4. You've experimented a bit with the art in American Barbarian, can you talk about those decisions? The art seems to have gotten simpler lately, why?
Well it's not really simpler. The linework is less labored, but I'm actually doing more work than on previous books. This is the first ongoing series I'm doing that I'm also coloring. Since I'm coloring it myself, I felt like I could minimize the linework to let the coloring carry some of the weight in terms of rendering the characters.


5. Can you talk about the specific, artistic process for creating American Barbarian?
I work on varying sizes of paper, some of it very large. I draw the pencils in the morning, ink the rest of the day, then color at night. I don't like to work on the computer while it's light out, although sometimes that can't be helped. Occasionally I'll get out the watercolors and do a painted page. Usually I just work in a single tone (shades of blue) and then lay different colors over it on the computer.


A big thanks to Tom Scioli for his responses. I called his artwork "simple" and feel like a chump for it. I will be clearer in my questions. I was the one being "simple."
Tom's work is enjoyable to no end. The man took comic book legend Jack Kirby's specific style, tweaked it into his own, and made it into a style. He turned one man's art into a genre. He turned the King of Comics into a deity.
Also, thanks to Tom for the above, super-cool Seneschal pic.
Posted by Emerson M at 8:26 AM