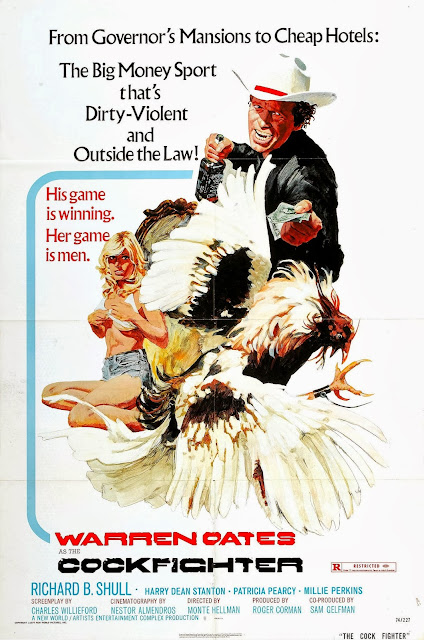 Cockfighter.
Poster courtesy of Wrong Side of the Art.
This is one of those films I looked for as a teenager and never found. I forgot about it. Years later, out of nowhere, there it was on DVD. I wanted to see it so badly, it had a big reputation to live up to. I really didn't want it to suck.
It is a classic!

Cockfighter is one of my favorite films.

I hate chickens. We had chickens when I grew up. The way they move is unnatural and wicked. The blackmail of their delicate bodies is disturbing. Trying to catch them when they get out of the pen; you have to grab them but they are so delicate you could easily hurt them but they are fighting against you. Recently, my mother had a chicken die and another chicken took to sitting on the corpse as a nest. Fucking disgusting. Eating their eggs and dead bodies makes me happy.

Anyway, Cockfighter is not for the weak at heart or for the chicken lovers. It contains real cockfights with real cock death. If your cockfighting education is non-existent: First, cocks will naturally fight for territory. Howevewr, fighting cocks are also trained to be murderous bastards. Spikes, also knows as "gaffs," are attached to the dew claw, on the heel of each rooster. Sometimes blades are used in lieu of spikes. The roosters then fight until one cannot continue. Roosters will fight to the death, so the loser is usually murdered or mortally wounded. 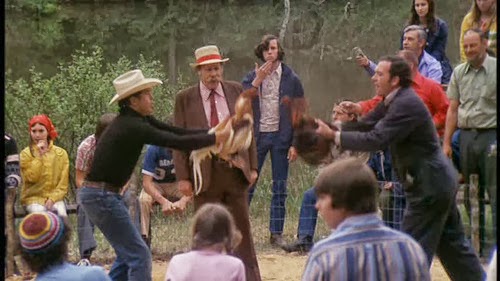 In the story, Frank Mansfield (played by Warren Oates,) has taken an oath of silence until he wins the big, annual, cockfighting championship. Frank has a prize cock that just kicks cock ass, through the film.
The cockfighting is real in the film. How did they assure that Frank Mansfield's cock would win? The DVD has a commentary track with director, Monte Hellman, he explains that they gave the cock that they wanted to lose rubber spikes instead of metal ones! So messed up.
IMDB reviewer, silentgpaleo, has a perfect review of the film:
"COCKFIGHTER is one of those films that is so surprisingly good that you wonder why anyone wouldn't want to see it. This is the definitive movie on rooster fights, and it features a great performance by Warren Oates. This is a superior flick; it is strange, but beautiful." 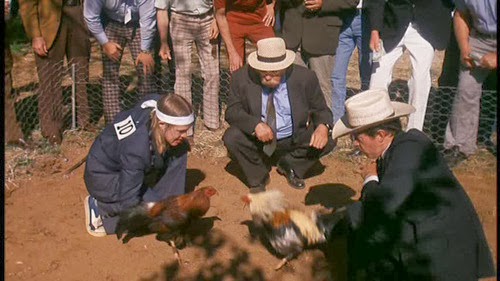 Warren Oates is at his surliest, silent, best in Cockfighter. Frank Mansfield is a stubborn, rat. He loses his girl and his trailer in a cockfight. He returns home and sells the family farm and ditches his old girlfriend, in order to continue his quest to win the big championship. It's hard to read Mansfield as he doesn't talk. He looks like he's always thinking and plotting but the beauty in Warren Oates is that he can play dumb and unlikeable.
The Cockfighter DVD has a great documentary on Warren Oates. Warren Beatty touches on Oates' ability to go where most leading men refuse.So many actors need to have some sort of redeeming intelligence and/or morality. The character is the center of the film, there must be a reason for that. The character must be "better" in some way than the common man. In most cases, the audience must be able to put themselves in the protagonists shoes.

Warren Oates was not afraid to be the common man. Not afraid to be less of a person than the audience. I see a dumb, schemer, not worthy to have a motion picture center on him, when I look at Frank Mansfield. Sure he wins a cockfight, but he's a self-centered, dirtbag. I see the guy that gets beat up by Popey Doyle in a bar, or a cab fare of Travis Bickle's not memorable enough to be in Taxi Driver. He's a chump arrested by Serpico and forgotten.
He's a character in the spirit of Fante and Bukowski, unloveable and forgettable. 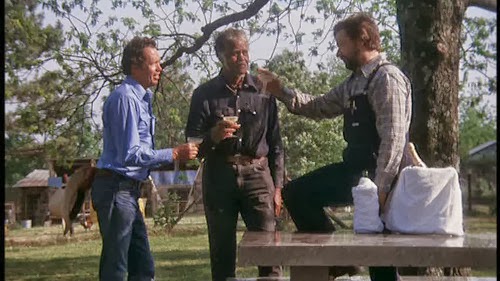 The actors around Warren Oates all do a fine job. This is a man-filled film. I love watching James Earl Jones' father, Robert Earl Jones. His good nature as a rooster trainer will make you smile. Ed Begley Jr. is a bit out of place as a punch hungry country boy. Harry Dean Stanton is slimy but dimensional . Richard B. Shull is perfectly smug. You want to punch him in the jaw. It's hard to tell if Laurie Bird is even acting, she's that natural. Her scenes are memorable, but brief. Patricia Pearcy is Frank's old girlfriend and she is excellent. Shy, nervous, and unbalanced. There is a scene where she visits Frank at his family home and leaves her mother waiting in the car that shines as one of those choices really only made in films from the 1970's. A strange detail which does not progress the story but says so much about a character. You rarely see these additions anymore. Story has always ruled the cinema but for a brief time in the 70's, character ran neck-and-neck.
A good portion of the crowd and other roles are filled in with folks from the cockfighting community.Charles Willeford wrote the screenplay, based off of his own novel, Cockfighter. Willeford also plays Frank's friend and cockfighting referee, Ed Middleton. 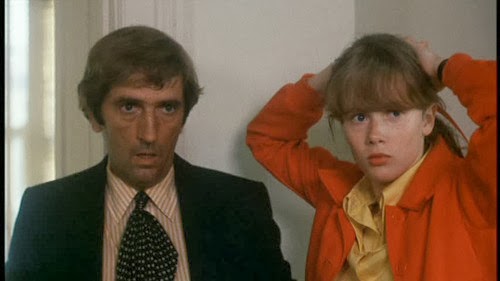 The camerawork feels loose and documentary-like in parts and then slows down in other parts. Some of the slow motion cockfighting scenes play out like those old NFL films.
At the end of this month, The Roxie Theater in San Francisco is having a Monte Hellman Retrospective. Hellman will be there himself for one of the nights. Cockfighter plays Tuesday the 26th and Wednesday the 27th. HERE's more information. The notes for Cockfighter says that the film played will be from a Beta master. I'm sure the quality will be most excellent, but I would really love to see a nice 35mm print of the film. 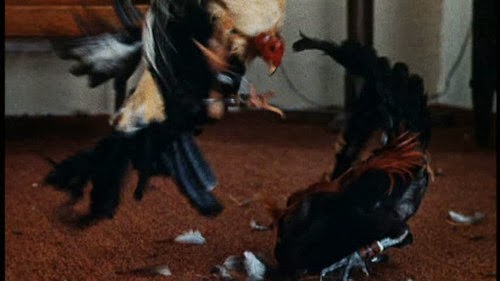 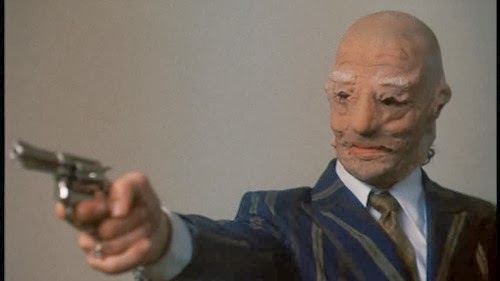 The film was also released under the title, Born to Kill. Here is a poster I swiped from Wikipedia. 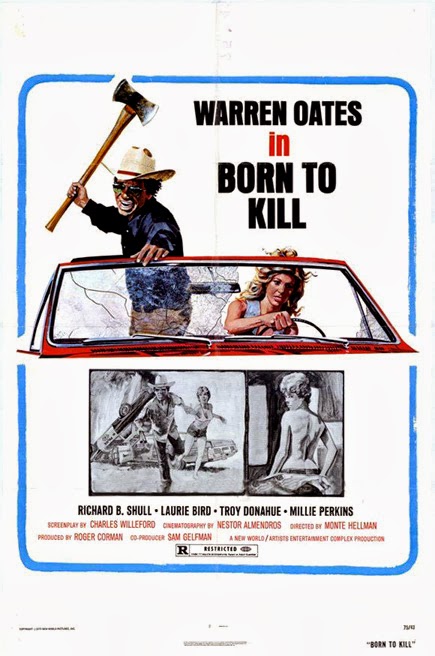 Here's the R-rated trailer. It has chicken violence and titties.

FYI, in 2007 Louisiana was the last state to pass cockfighting laws. However, cockfighting is now illegal in every state. States where the "sport" is a misdeamenor still have problems with cockfighting rings crossing state lines to avoid felony charges in their own state.
There's a great piece on cockfighting from June, 2000 over HERE.
Posted by Emerson M at 11:46 AM