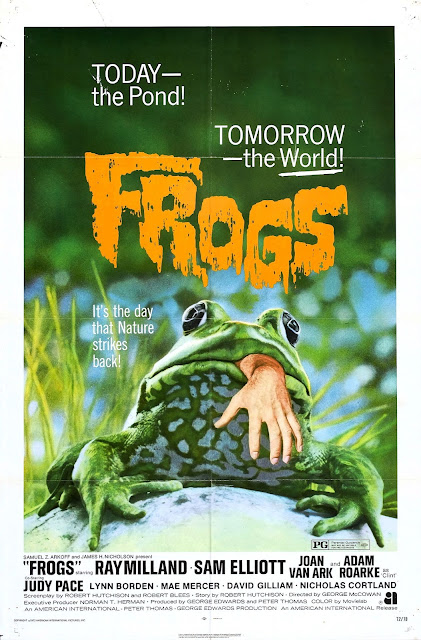 Frogs.
Happy 40th birthday to Frogs. The film was released on March 10, 1972.
The film is just too good to be true. Ray Milland is the papa of a large southern family. He has a large estate and is dead set on celebrating the 4th of July, which also happens to be his birthday, in a grand fashion.
The local animals drive him crazy and he sends his gardener out to lay down some pesticide. This is the final straw for the animals. The war is ON! It's not always clear which animals have signed the declaration of war, but the family gets their asses handed to them by all the creatures of the swamp.
I love that poster.
The tone is really unclear for the first half of the film. The cutaway shots of the frogs are not scary. My six year old daughter didn't even realize it was a horror movie, when I sent her to bed.
"Those frogs are going to go crazy and eat everyone," I said.
"Those frogs? They can't eat a person, they'll get stepped on." She said.
Not a film that will keep you up at night.
Great trailer as well.

Poster courtesy of Wrong Side of the Art.
Posted by Emerson M at 1:36 PM