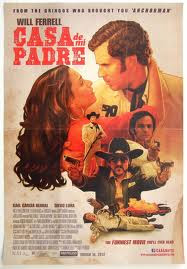 My wife and I just got back from seeing Will Ferrell's latest opus. We laughed almost the entire time. The film will not have you choking on your Milk Duds but it can keep a constant I.V. of chuckles, if you get it.

The American press seems to think the film is a play on Mexican tele-novellas, it really isn't. There are small swipes, but the film takes much of its tone from the shot-on-video, fat Mexican guy in a vest and cowboy hat, narco-gangster DVD's that you find at the flea market. The film mixes this with the epic, ranchero, Pedro Infante type classicos.

Make no mistake, Casa de mi Padre is not a good film. It is funny, but if you don't have just the right perspective, even that is lost. The audience we saw the film with was primarily latino and got all the notes, that helped. Laughing fosters laughter.

Will Ferrell is one of the few operators in Hollywood that interests me. He is courageous about switching genres and exploring new territory. He's exciting to watch, even when it ain't working.