The Brute and the Beast. 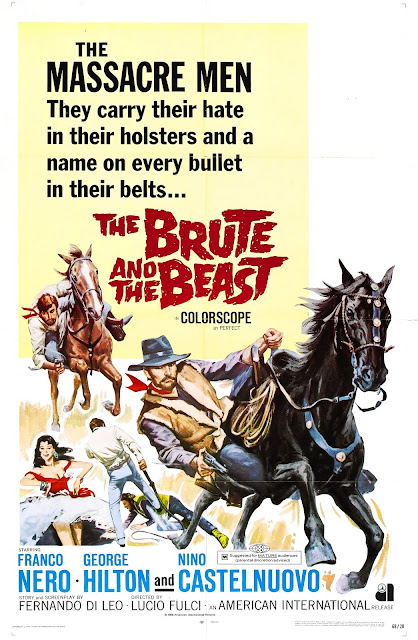 The Brute and the Beast is coming. That sounds like bad grammar, but it ain't. The film also known as Massacre Time is set to be released by Wild East on April 24th. They opened pre-ordering this morning over HERE.
The film stars Franco Nero and George Hilto and was directed by goremeister Lucio Fulci. The story is pure spaghetti; a man returns to his old hometown to find it overrun with bandit scum. The old bandit rules with an iron fist while his pscho-son terrorizes the people. Can the hero recruit his drunken brother and save the town?
The Brute and the Beast is a fantastic tier-2 spaghetti western.
Features:
• Two different English audio tracks - the International English dub,
and AIP's American release dub.
• Audio Interview with director Lucio Fulci
• Interview with star George Hilton
• Extensive Picture Gallery
• Radio Spots
• Trailers
PRE-ORDER PRICE $9.95
Limited Edition $14.95
Release date APRIL, 2012