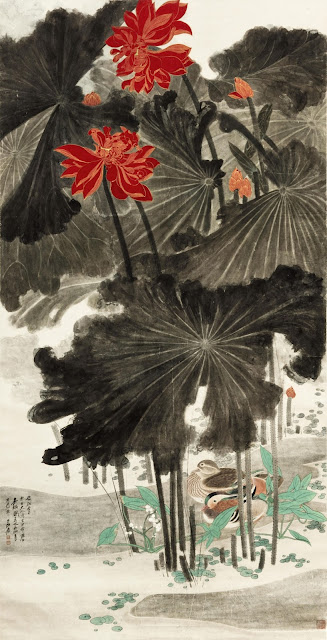 Recognize this painting? I didn't. In fact I've misspelled the artists name every time I've written it.
The artis is Zhang Daqian and if prices paid for art are any indication of popularity, he is the Big Man On Campus. Move over Picasso.
The French research company Artprice has released the details regarding prices paid for art at auctions in 2011.
1. Zhang Daqian: $506.7 million
2. Qi Baishi: $445.1 million
3. Andy Warhol: $324.8 million
4. Pablo Picasso: $311.6 million
Wow. Some staggering results. In all, $11 billion was spent on art last year. Chinese dealers and collectors are buying a lot of Chinese art. Chinese art comprised 39% of the total market. The U.S. made up 25%. Artprice follows 450,000 artists.
Picasso had been number one on the list since 1997, except for 2007, Warhol took the top spot that year.
The painting above is Lotus and Mandarin Ducks by Zhang Daqian.
(via bloomberg.com)
Posted by Emerson M at 6:46 AM