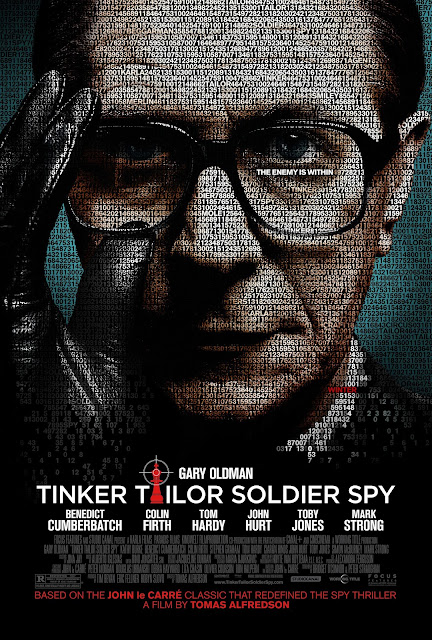 Tinker Tailor Soldier Spy.
Matt and I saw Tinker Tailor Soldier Spy last weekend. We were both lost and confused, a little scared, cold, and convinced wolves were after us. Seriously, this film is SUBTLE! We both felt like we couldn't catch up to the story. I was following the story but like a ten year old watching a Shakespeare play, I was always a couple of steps behind. I also had a very tough time following the emotional cues of the actors. The whole 'keep a stiff upper lip' and then have an emotional breakdown kept me from really knowing how the characters felt. "Oh, I guess he was pissed about that."
Both Matt and I were pretty unhappy when we left the theater.
The funny thing is that we were both so disappointed in ourselves that we started conducting research. We both read multiple synopsis' of the film and book. We both learned about John LeCarre and his character, George Smiley. Matt started reading the novel and I watched the Alec Guinness 7-part BBC mini-series from 1979.
The mini-series is also fantastic. It's actually a clearer telling of the story. Hell, they had seven hours. The series could be seen as a bit slow for our 21st century eyeballs, but I didn't feel that way.
The role of George Smiley was always considered Alec Guinness' finest work, but poor old Alec gets blown away by Gary Oldman. To be fair, Mr. Guinness really didn't stand a chance. The BBC version had a limited budget, and while there are a lot of flashbacks, the characters are forced to verbalize a lot of the story. Gary Oldman's George Smiley hardly says a word, his eyes tell us everything we need to know. It is an amazing performance. In order to tell the story in 1979, Alec Guinness talks the story through with the other characters. Guinness' George Smiley is a blabbermouth compared to 2012's George Smiley. Unfortunately, the subtle, calculating George Smiley simply cannot exist in 1979.
My wife and I went and saw the film again this week. She watched a lot of the mini-series with me. I kicked her out just before the big reveal, so the plot would be fresh for her when we shelled out $21 to see the film in the theater. Knowing the story and the names of the characters and a bit of the backstory just elevated the film to no end. Like Se7en and Ronin, it is a masterpiece of it's genre. I will see it again.
Here is a little featurette I found on YouTube. Pretty cool.

Here's a cool trailer someone created for the 1979 version.