And then there was one. 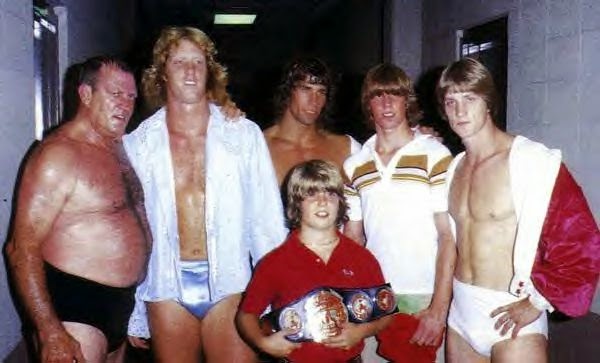 It's a story most wrestling fans know.

Six boys were born to legendary wrestler, Fritz Von Erich. The first son died as a child. The remaing five all grew and became wrestlers with varied success.

They were legends in Dallas but by the time Fritz passed away in 1997, four of them were dead, three had committed suicide.

Kevin Von Erich is the last of the Von Erich boys.

Longform posted this October 2005 article from the Texas Monthly. The article left me breathless at parts. I know the Von Erich story well, but this telling is particularly well written with some insightful information. The description of Mike Von Erich's spiral and eventual suicide is just crushing.

Kevin is a real nice guy. I met him once in January, 2005, and talked with him on the phone a couple of times for my Bruiser Brody book. Some pretty emotional stuff.

From the Texas Monthly article:
"Then there’s the subject of his brothers. When they come up, Kevin talks about the 32 gallons of milk delivered weekly to the house when they were kids and the 40 pork chops Doris would cook them for dinner. His stories end with bee stings, milk spills, and trips to the emergency room. But a lot of awful history has washed over Kevin, and reaching through the murk for Family Circus scenes has helped keep him afloat. In a strange way, though, it also pinpoints the tragedy. Everybody who knew the Von Erichs says they all were good boys. But there’s always an addendum: They did have their demons. And when it came time to address them, the Von Erichs concentrated on what the world saw outside the curtain."