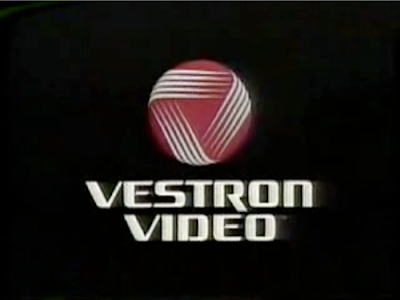 The Scholarly Kitchen has an interesting article about Vestron's Law HERE.

"Vestron’s Law, which covers all media types and market segments, states that when publishers or content producers in non-print media license rights to third-parties, over time the pressure builds to revert those rights."

If you watched VHS tapes in the 1980's you'll remember the Vestron logo at the beginning of many tapes. Vestron was a giant in the VHS distribution world. They were the middleman between the studios and the thousands of video stores across the country. The studios saw that they were making a lot of money and decided to distribute themselves. Vestron attempted to make their own films, starting with Dirty Dancing. Unfortunately, the studios could play in Vestron's yard, but Vestron had a lot of trouble playing in the studio's yard and the quality of the films they made went downhill, fast. 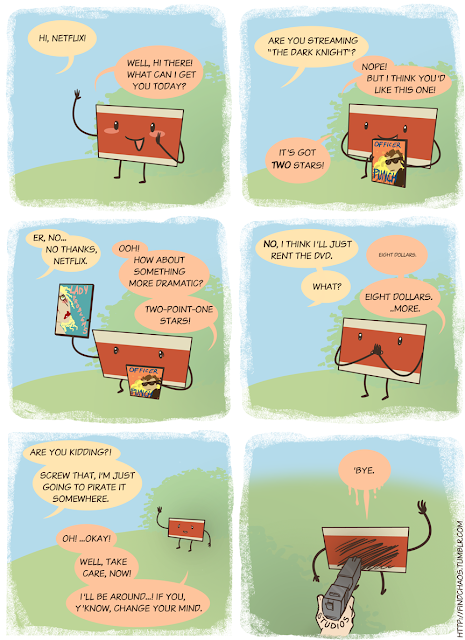 It is interesting to watch the studios squeeze Netflix the same way.
"More dramatic is the way Vestron’s Law is playing out in the high stakes world of entertainment video. See, for example, the strong statements reported in the New York Times by executives at TimeWarner and its HBO division about the growing strength of licensee Netflix. Netflix was just fine when it provided incremental income for the movie studios, but now that it’s substantially enlarging its market share, the studios are objecting to the terms. Netflix is the new Vestron — but there is this important difference:  the Netflix CEO operates with the lessons of Vestron’s Law before him."

While I don't completely agree with these cartoons on the subject, they bring up some interesting points. The bottom one is particularly funny to me because I worked in a video store through most of the 1990's. I have a HUGE collection of VHS tapes, many pirated. At that time I was seeing VHS tapes thrown away from damage and due to a lack of space in the shop. Warriors of the Wind (before I, and probably you, knew Miyazaki's name) was just gone one day, "No one rented it," my boss said. Carnosaur with the only trailer of Corman's Fantastic Four film was tossed to make room for one of six copies of Powder. UGH. I horded because I never knew what was going to disappear. I horded because I wanted to watch, what I wanted to watch, when I wanted to watch it. Netflix's library basically cured me of that hording mentality. The films were safe. Netflix had it under control. I could get them fast.

A couple of months ago I heard that Netflix would no longer be carrying the Criterion Collection. I puked a little inside my mouth. The films aren't safe. 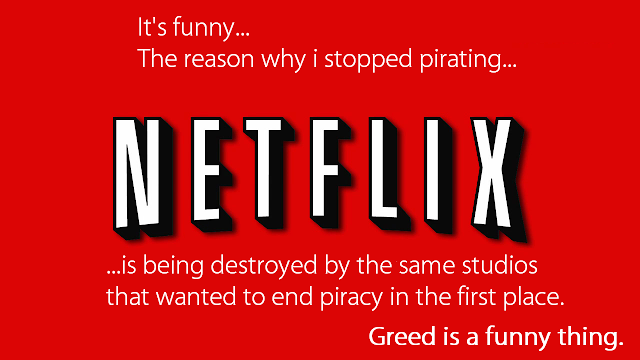 (I found the Scholarly Kitchen article from VHS Wasteland, which is a fantabulous site for old, genre, VHS covers.)
Posted by Emerson M at 11:56 AM

Email ThisBlogThis!Share to TwitterShare to FacebookShare to Pinterest
Labels: Vestron