Magic Trip: Ken Kesey's Search for a Kool Place.
Magic Trip is taking a magic trip around the country during August and September. The theater schedule is HERE.
The film chronicles Ken Kesey and the Merry Pranksters first trip across the country in Kesey's bus, nicknamed Further. Along with Kesey, Neal Cassady, and The Grateful Dead, are the usual band of creatures known as The Merry Pranksters. If you're interested in the culture at all you will recognise the names: Wavy Gravy, Mountain Girl, Ken Babbs, and the list goes on.
The Pranksters shot the film themselves. Apparently, the raw footage was lost all this time, found a couple of years ago, and edited down. 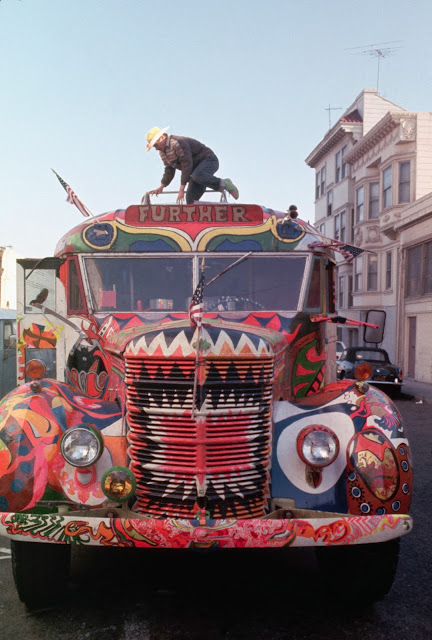 My mother was one of about ten people to sit in a classroom at San Jose State when Ken Kesey got the film back from the lab and watched it for the first time. I asked how she received the invitation and she said, "I was going to San Jose State at that time and I was cute and those guys asked me to all sorts of parties and events." They watched the films all day and into the night. She remembers that Luis Valdez, founder of El Teatro Campesino, was one of the handful of people there. She used to babysit for an artist named Iver Flom (I could have that name wrong) and his girlfriend from Switzerland, Sidney, who actually had a child out of wedlock (oh, the shame) and she thinks they may have been there as well.