Daily poster: I Walked with a Zombie. 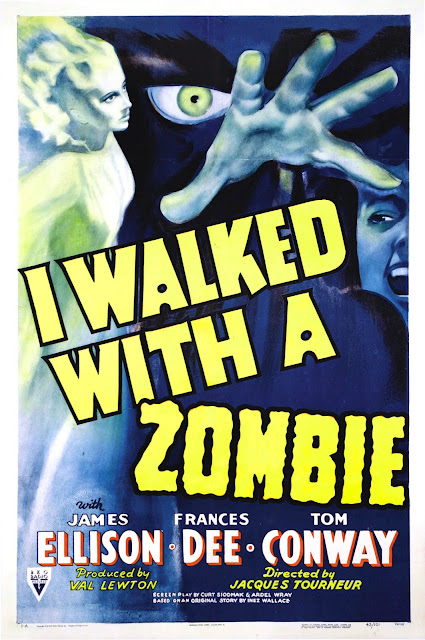 I Walked with a Zombie.
I've been making my way the Val Lewton RKO films. They are a quirky handful of films. I don't use the word "quirky" lightly. They are advertised as horror films. Grab a book on horror films and you will see stills from these films. The dead dog in the tree from I Walked with a Zombie is in practically every horror book ever written.These are not horror films. They are something other. Suspense films with a supernatural element. But even the supernatural element can be debated. The films cleverly disguise the truth, and refuse to positively identify their universe as a supernatural one.
The films are clever. The stories are original and you cannot leave the room. They are not scary but they are smart and interesting. I Walked with a Zombie has passionate, stirring, music, mixed with some noirish lighting and shots. The whole thing could be a mess if it had not been handled so deftly.
A nurse comes to the Carribbean island of Saint Sebastian in order to care for a woman who is neither living nor dead. She discovers that many of the locals are part of a voodoo cult. Do they hold the answers to her patient's condition?
There are twists and turns and a bug eyed, creepy looking gentleman.The end is really cool.

Email ThisBlogThis!Share to TwitterShare to FacebookShare to Pinterest
Labels: Daily Poster, I Walked with a Zombie, Val Lewton, zombie