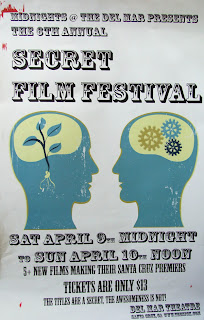 Well, the secret is out.

Nyteschayde and I went to the sixth annual Santa Cruz Secret Film Festival last night/today and it was packed. We arrived just at midnight with a line to the end of the block, and were told that there were only 12 tickets left. The Del Mar Theatre was FULL. We got the couch style two-seater in the center very back, just where we wanted to be, which was rather lucky. I brought snacks, he bought popcorn and drinks.

The quirks of the festival are that it runs from midnight until noon with only ten minute breaks between films. Also, patrons have no idea what films they will be seeing. I ruined that last quirk for myself.

The gentleman who runs the festival is named Scott. I met him through email when I posted here about the film Rubber and asked why Magnolia Pictures was advertising an opening for the film in Santa Cruz while the Del Mar's website said no such thing. After some prodding, he broke the "secret" and told me that Rubber would be at this year's festival. Damn, I always ruin surprises for myself. I did get to meet Scott at the show and we chatted a bit. Nice fellow.
There was a raffle with some pretty cool DVD's, posters, t-shirts, and midnight movie tickets. I didn't win anything but managed to scrounge up a Rubber poster, a 13 Assassins poster, and the poster pictured above.

It was a great time. Scott and the good people of the Del Mar put on a fabulous show and I would guess that 75-80% of the movie goers were still there when we were let loose at 12:30 this afternoon.

I will definitely be there next year. But now I am amped after walking home. Think I'll watch some old Italian Hercules movies.

Man, this trailer for The Troll Hunter does not do it justice. You should really try to see it in the theater.
On the topic of small screens not cutting it, here's David Lynch: