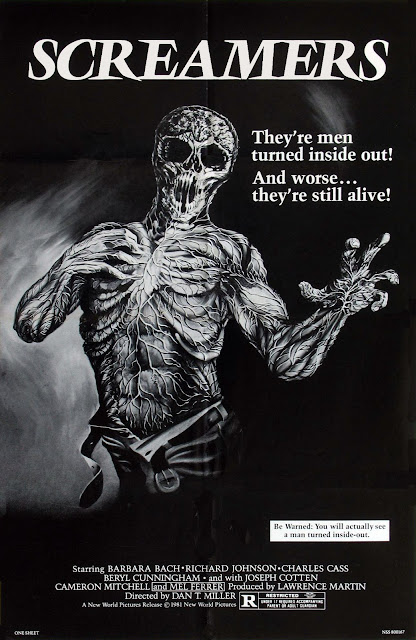 Screamers.
Screamers was originally titled, Island of the Fishmen when it was released in Italy. On a remote island, a Dr. Moreau-ish scientist discovers a way to turn men into amphibianish creatures in an effort to curb overpopulation and allow people to live under the sea. The scientists partner has discovered Atlantis. He commands his partners creatures to plunder the lost city.
Two groups of folks crash onto the island. One a group of convicts, the other a group of dirty do-gooders.
A voodoo priestess shows up. A volcano goes off.
The film was recut for American audiences and released as Something Waits in the Dark. Even with new gore effects, the film flopped.
The film was recut again with a scene of a man being turned inside out added. The whole inside out dude became the advertising staple and the film was released a third time as Screamers.
I remember seeing the Screamers advertisement in the newspaper. My neighbor's mom read the tag line for me. It scared the guts out of me. I was so intrigued and scared of someone being turned inside out. 'And why does he still have his pants on? How does it work? Did all of his guts fall out already, I just see muscles and bone? Where are the damn guts?'
I still haven't seen the film. I will get on it.


Poster courtesy of Wrong Side of the Art.
As a bonus, here is the wonderful poster for the original Island of the Fishmen. 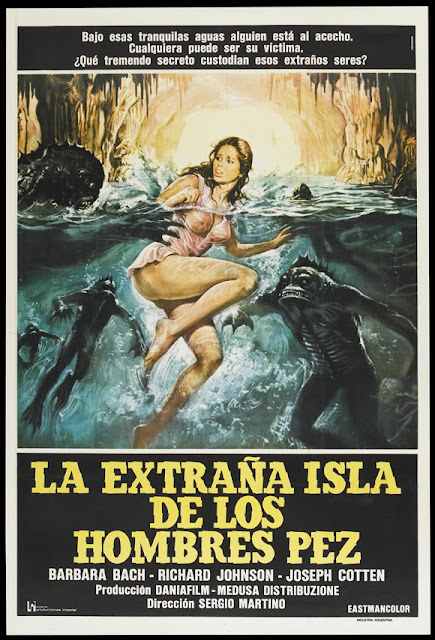 Email ThisBlogThis!Share to TwitterShare to FacebookShare to Pinterest
Labels: Daily Poster, Island of the Fishmen, Screamers