The new and improved Spider Man. 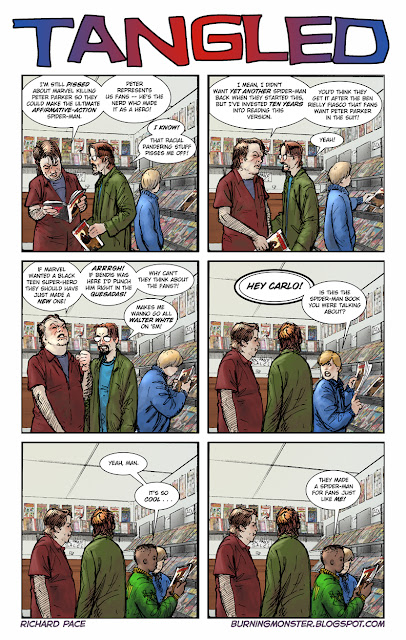 This comic was published yesterday on Burning Monster. It's pretty right on.
For those that aren't in the know, the Ultimate Marvel comics version of Peter Parker was killed. A boy named Miles Morales has become the new Spider-Man. The death of Peter Parker would probably been controversial enough, but the fact that Miles Morales is of Latino and African American descent has some fans pissed off.
I think the move is incredibly positive. My first reaction was, 'Spider-Man should have been black from the start.' His story is an American urban story about an outsider given incredible powers and the subsequent ways in which he deals with those powers. As Uncle Ben said, "With great power, comes great responsibility."
Until The Falcon came along in 1969, The Black Panther was the only major black superhero. The Black Panther is the king of an African country. He is not American. He is not an outsider.He's a rich, industrialist, king. Not so easy to relate to. 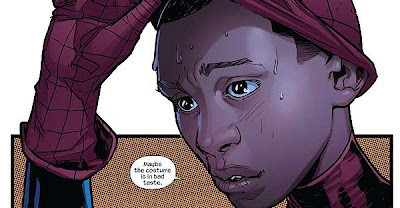 The writing in the new Ultimate Spider-Man is clean and the emotional notes hit perfectly. Miles Morales in two issues (maybe #3 is out, I have to go check) is a layered character. The Morales family is established through spot on dialog and expressive art. There is not a lot of action in the first two issues but the story doesn't need it.
My only complaint is one that I have with a lot of current comics. They take their visual cues from motion picture directing and consequently waste a lot of page space attempting to create tension. You can read a modern comic in less than two minutes.
I highly recommend the new Ultimate Spider-Man. 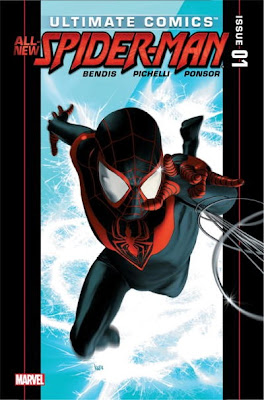