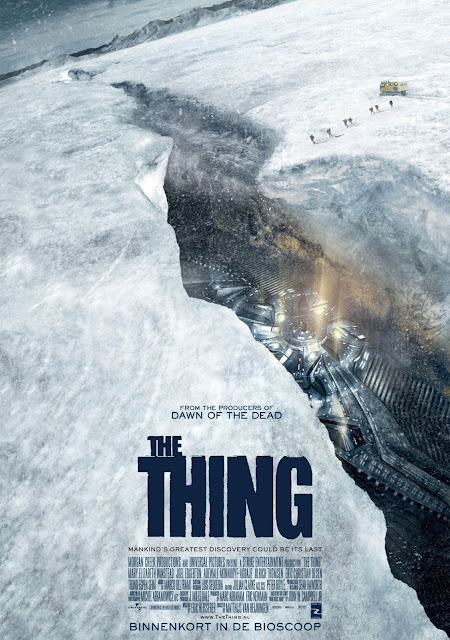 The Thing.
I love this poster.
The Thing prequel opened this weekend, tonight, I guess. I'm not hearing good things. I was very afraid they would pull an Alien -- Aliens switch on us. The first film was a horror film and the second was an action film. The creature was revealed to the public, it's features were normalized and all there was left to do was to throw in MORE of them. It worked with Alien -- Aliens, and it sounds like they tried that pattern with The Thing -- The Thing and it failed. Too bad.
I do feel like CG is now at a level where it can work for me. I believed it in the Rise of the Planet of the Apes. They got me. I did not know ALL the apes were CG and I believed them every step of the way. I felt for Caesar. I felt sympathy and sadness and excitement. I think some really good story telling and CG could get fear to work for me as well.
The big point for me, and it's probably a trivial thing to most, is that at one point in The Thing, it has GOT to look exactly like the Carpenter version. Where they cross over has got to look exactly the same. Same Norwegian helicopter, same guys, same dog, exactly the same. I hear they failed on this point. This detail will probably keep my $10 in my pocket. Sounds petty, but it speaks volumes to me about their commitment to the property.
Sounds like The Thing, as a film, is also a disfigured, partial, alien, clone version of the 80's The Thing. We all knew it would be. So, go throw the Carpenter (or even the original, it's damn good as well) version back into your DVD or blu-ray player. In my opinion it is one of the few PERFECT films, not a frame is off.

And here's the fantabulous musical trailer that's been making the rounds. Thanks Mike for sending it my way.