Daily poster: Race with the Devil. 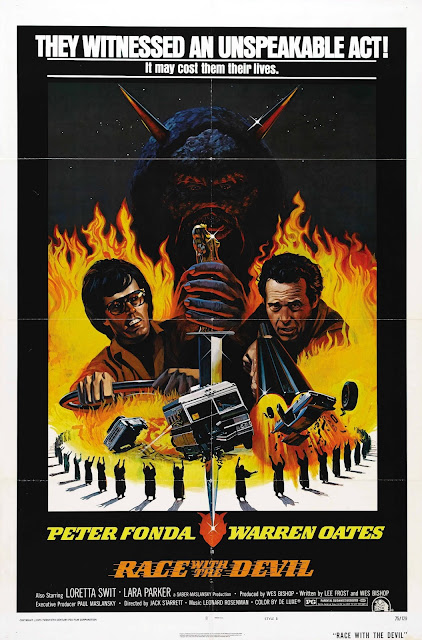 Race with the Devil.
Peter Fonda and Warren Oates are out riding their motorcycles around the countryside. Their wives, Hot Lips from MASH and Lara Parker are taking care of the dog and the RV.
The guys witness a Satanic ritual. A girl is sacrificed to the Dark Lord and the cult sees Fonda and Oates watching. The chase is on.
Race with the Devil is a suspense (not quite horror) chase film. The pacing is fantastic. The acting is sturdy. Warren Oates is one of my favorite actors of all time and it's kind of cool to see him do something this light feeling. His character's intentions and motivations are right there on the screen. Not a typical role for Oates but even his silent glances mean something. His yawning in a background shot while in the police cruiser says something.
The action in Race with the Devil actually peaks with a Road Warrior like car chase/battle, no kidding. There is a car roll and a dolly-in-music crescendo on Peter Fonda that nearly matches a shot in The Road Warror.
The film is a lot of fun. I read somewhere that Kevin Smith said that Race with the Devil was a big influence on his film Red State. Maybe I will have to see that film.
Poster courtesy of Wrong Side of the Art.
If the film peaks your interest. Don't watch the trailer, watch the film with fresh eyeballs.