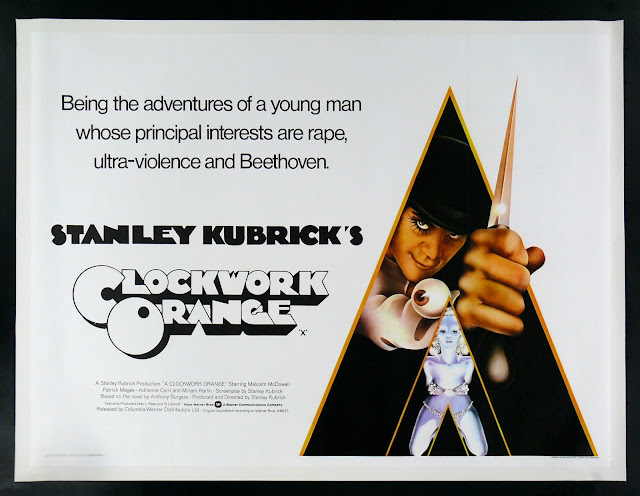 I first saw A Clockwork Orange at a friend's house when I was twelve. The summer before 7th grade. I got my own copy when I was in eighth grade and watched it every weekday for over a month. I played it when I got home from school, but before my mom got home from work.

I've been watching all of Stanley Kubrick's films lately and watched A Clockwork Orange a couple of weeks ago. It was shockingly beautiful compared to my old VHS bootleg. I was surprised how I had completely forgotten large parts of the film, but as it was playing out, I could recite the dialog along with the film. It was lodged in the back of my brain.

I was amazed at the dialog. The seventies British slang mixed with the fictitious future slang seamlessly. It turned out that small expressions and patterns of speech that I had quoted for years were expressions of imagination. The writer of the novel, Anthony Burgess, was a linguist and had created his own register of slang for the book, called Nadsat. Nadsat combines the Cockney slang of the day, Russian, some verbiage from the King James Bible, some German words thrown in, and some completely fictitious words.

I remember talking in Mr. Deltoid's voice as a young teen, but not being quite sure that I should. He's a social worker, pervert, home invader. His character is not defined and certainly not two dimensional. You can never exactly grasp who he is, what he does, and what he wants. Like much of the film, the vagueness adds a rich layer of realism to the film. A quick aside, my wife and I watched X-Men: First Class a while back. The film was fine, EXCEPT that, the filmmakers left NO stone unturned. We learn how Beast becomes blue and furry, how and why Mystique joins Magneto, how Professor X gets paralyzed, how/when they get the name X-Men, how Cerebro is created, how Magneto gets his psychic-proof helmet, every single question you ever had about the film version of the X-Men is answered. It is sort of disgusting. It's the new way, I guess. It's everywhere. Look at all of the slasher remakes. Halloween, Friday the 13th (at least they barely showed Jason's face) and as if the remake of The Texas Chainsaw Massacre didn't explain every fucking detail of the family, they had to go and make a prequel as well. The chaotic, lack of explanation or reason was 90% of the beauty of the original. Rant complete. 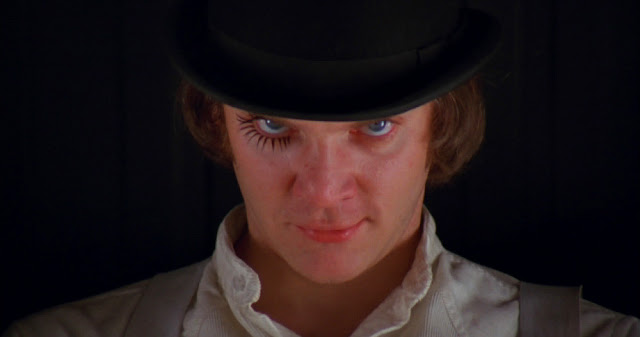 If ever anyone was born for a role, it is Malcom McDowell to Alex. McDowell's smug attitude, know-it-all smile, annoying voice, and the ability to switch these features off and evoke true and instant sympathy IS Alex. Kubrick was famous for many, many takes. As a  testament to Malcom McDowell's Alex-ness, this from Wikipedia:
"...however per Malcolm McDowell, he usually "got it right" early on, so there were few takes."

The other characters in A Clockwork Orange strike up and down extremes in realism vs. cartoonishness. Watch Chief Barnes' face. If you listen to his voice, with all the screaming and yelling, he appears clownish. But look at his face, especially during Alex's stage performance after being "cured." His feelings read like an open book, but hardly clownish. The priest in the prison is a fine, subtle performance. Patrick Magee as Dr. Frank Alexander is frighteningly crazy. He is so over the top, it's hard not to laugh at his pain. Perhaps this is part of Kubrick's view of the future. I remember coming out of the theater after seeing Pulp Fiction and hearing two people talk about how realistic the characters were. REALISTIC? There is no way you could even imagine those characters off of the screen, interacting in the real world. But perhaps I was wrong. People seem to be in a race to define themselves in two-dimensional terms. The high school clicks of nerd, jock, metaller, pot-head, good girl, bad girl, etc. are now part of adulthood as well. Like films today, nuance is dying and Kubrick's view doesn't seem that far off.

Like some of the characters, the violence in A Clockwork Orange is elevated to cartoonish levels, you could even call it ultraviolence, and they do. Kicking and stabbing folks to death is violence. Smashing in a woman's face with a giant, priceless, penis sculpture is ultraviolence.
My favorite fight scene in any film has always been the brawl in the old theatre in A Clockwork Orange. Alex and his Droogs come across Billyboy and his Droogs raping a lady. The gangs clash in an operatic, over the top, bodies flying, fight that rivals the fight scenes of the finest "action" movies.

David "Darth Vader" Prowse plays Dr. Alexander's bodyguard. He has a face you would play Dungeons and Dragons with and a body you would go to the gym with.

Pauline Taylor plays the purple haired psychiatrist at the end. Very hard not to fall in love with her. She is the closest person to "normal" in the film. You want her to hold your hand and lead you through the callous world of the future. 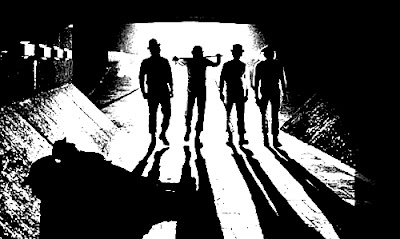 At the time of the film production, the available edition of A Clockwork Orange novel was missing the last chapter. That last chapter would not be seen by American eyes until the late eighties. I was in high school when it was released. Essentially, the story starts over. Alex sits in the Korova Milk Bar with a new set of Droogs, chewing over, what to do with their night. However, Alex is growing up. He's more likely to watch, rather than participate, when his Droogies partake in the old ultraviolence. He pours out his beer. Finally, he runs into his old Droog, Pete. Pete is married now. His wife laughs at Alex's immature slang. Alex finds himself pining for a child and a wife. His days of youth are numbered.

Through adult/husband/father eyes, it would have been really cool to see Alex with a new set of Droogs, with an all new style, growing disenchanted with the old in-out and committing acts of ultraviolence. However, the film ends with Alex's smirk, assuring us that the old Alex is back, ready to hit the streets. It is a film about youth, in my case, for youth. It's one of the rare films where YOUTH wins in the end! A 'growing up' chapter would have twisted the film into an 'aha, I told you so' for my parents. It would have undermined the anti-authoritarian, fascistic, theme and sapped the venom of the first half of the film. It would be the same as every other film; morality, responsibility, and respect are good things. How many hours of film history are spent ramming these sentiments down out throats?

The music in A Clockwork Orange was wholly original. And when I saw the film for the first time, I knew it. I knew that music. I had just heard it. We had a music teacher, Mr. Stoner, in elementary school. He came into the classroom a couple times a month and attempted to teach us about music. In sixth grade he brought the 1968 album of Switched on Bach. It sounded like nothing I had heard before.

At a Fourth of July party that year, I found an article in a magazine on the woman who had recorded the album, Wendy Carlos. I was 12 and maybe a bit late to the game, but I had no idea there was such a thing as a sex change. Wendy Carlos had been born Walter Carlos. Consider my mind blown. Within a couple of weeks, I saw A Clockwork Orange for the first time.
The film was released in the U.S. with an X rating. Kubrick took out 30 seconds of footage in order to get an R rating. All of the DVD copies are the X-Rated version.
The film was nominated for a Best Picture Academy Award, but lost to The French Connection.

There are a mountain of great "analysis" videos on youtube. This one is my favorite. It is three parts.