Daily poster: Nothing But the Night. 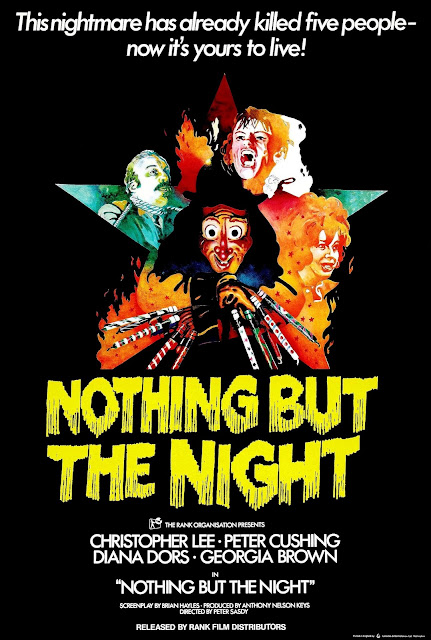 Nothing But the Night.
This highly original British thriller was just released on DVD last month. I watched it last night with Vince and Jan.
Christopher Lee was interested in producing his own films. Nothing But the Night was the first and last film produced by Lee's Charlemagne Productions. Lee brought with him, his longtime onscreen rival, Peter Cushing. The film suffered a horrible distribution deal in the United States and died a quiet death.
The story involves the death of three members of a large and valuable trust. A girl with repressed memories and her mother's struggle to reunite with her daughter. Well, not all of those plot descriptions are wholly accurate, but therin lies the juice of Nothing But the Night.
It is a fine film, not too slow and very original. There are parts where you may want a clean explanation of what is happening. Just sit back.
I have no idea where the title comes from. Also, note how many times Lee and Cushing smile at each other at completely inappropriate times. There must have been some sort of in-joke during production; perhaps they were very happy working together as partners instead of enemies in the story. It's distracting and extremely charming.
Had a lot of fun with this one.
Don't watch the trailer on youtube. It's actually a critical scene from the film and not a trailer. It will spoil the film for you like sun-warmed mayonaise.
Poster courtesy of Wrong Side of the Art.
Posted by Emerson M at 4:46 PM

Email ThisBlogThis!Share to TwitterShare to FacebookShare to Pinterest
Labels: Christopher Lee, Daily Poster, Nothing But the Night, Peter Cushing