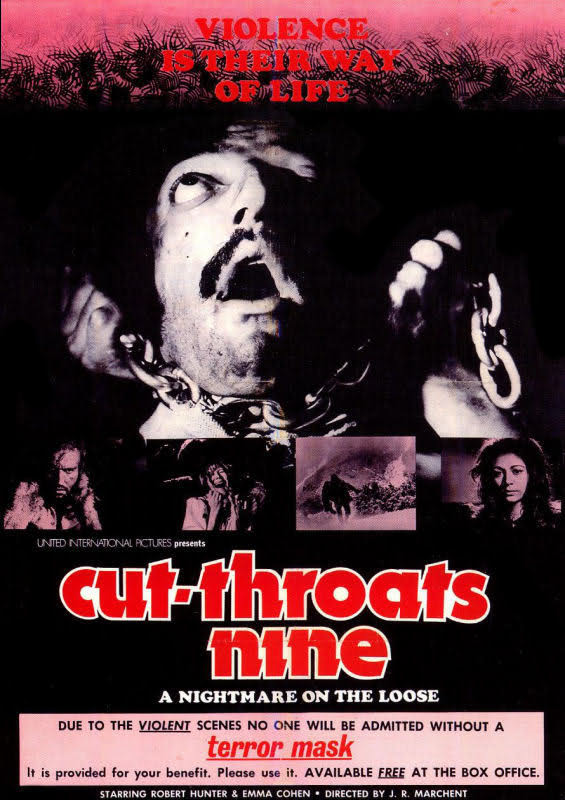 Happy birthday to one of the most brutal Spaghetti Westerns, Cut-Throats Nine. IMDB has the film premiering in Barcelona on July 10, 1972. Good times.

A group of outlaws is being transferred to a new prison. An ambush and subsequent escape leaves only an Army sergeant, his daughter, and a group of convicts alive. The convicts are all chained together. The Sergeant is unusually desperate to get to civilization. The land is harsh. The convicts are ruthless and cunning. The Sergeant's daughter is weak. One of the convicts may be kind, or he may be devious. Will they starve to death? Freeze to death? Or kill each other? A cool story.

Cut-Throats Nine is the heaviest of Spaghetti Westerns. Only The Great Silence comes close. The music is somber, rhythmic, and depressing. There are no good guys. Everyone is hate-able except the Sergeant's daughter, who you can tell is only there to be violated and traumatized. The film is also the goriest of Spaghetti Westerns. Coming near the end of the Spaghetti Western cycle, in 1972, the film stretched the genre into the village of the exploitation film in order to sell some tickets. The gory violence is a tool to this end.

A couple of years ago, rumors began circling that Harvey Keitel was going to film a remake. The second act of the original is so very heavy and so slow; while the core story is excellent, Cut-Throats Nine is a perfect candidate for a remake.

The trailer has quick cuts of gore and boobs.