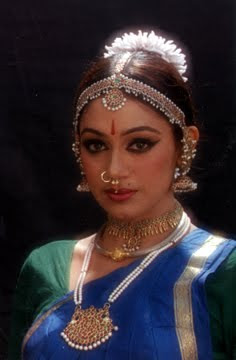 Given to me by Shobana. I worked on a film with her called, Mitr, My Friend. The crew was mostly from India and no one would talk to her. I didn't know why. I had a dream about her and told a couple of the guys. They told her and she came up to me, "I hear you've been dreaming about me." We became friends on the set. She kept asking me to take her to see Castaway for Valentine's Day. I didn't. We emailed back and forth a lot. I later found out that she is a pretty big actress in India. When I told her that I got a girlfriend. She stopped writing. Oh well.
The back of the picture says, "For the only person on this crew with a sense of humor. Twinkle Toes."
Posted by Emerson M at 1:49 AM