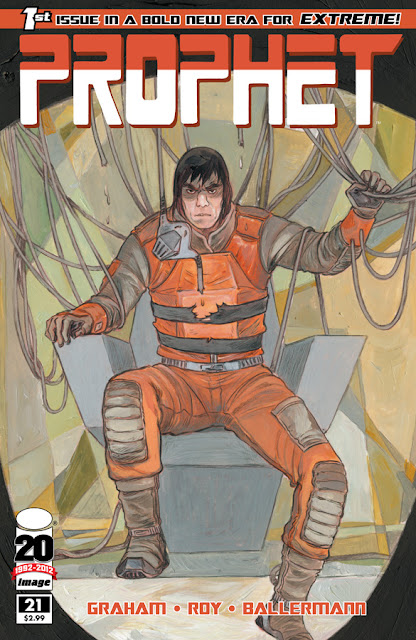 My friend Nico told me to pick up the latest issue of Prophet, #21. I hadn't thought about that character in years. I tried to forget Rob Liefeld's 'roided out, lame headgear wearing, mockery of a man, many moons ago.

John Prophet was a homeless gent in the late 1930's when he was given the powers of badassery. The financier of the Prophet project was evil and wanted to use Prophet for murders. The doctor that created him didn't like this and tried to protect Prophet by shooting him through time. Prophet is a time traveller who fights with big weapons. Well, not anymore.

I managed to find a copy of Prophet #21 and damn was Nico right. John Prophet wakes up to find aliens ruling this planet. Prophet is slimmed down and looks like a normal fella. The brilliance in Prophet #21 is that the culture, customs, and biology of the alien life forms are so thoroughly alien and yet believable. It's an Alan Moore comic not written by Alan Moore. The smallest ideas are original and fresh. The mood has a fantastically normal pace. The book has real charm.

The story is called Man Out of Time, and I believe it will run for only two issues. With all the buzz it is getting, I wouldn't be surprised if Prophet kicks the steroids and lame helmet for good. Brandon Graham and Simon Roy are the artistic duo responsible for this storyline. I've read Brandon Graham using the expression "barbarian science fiction" in reference to the direction of the comic. Sounds a little John Carterish to me. Let's hope John Prophet keeps his brain, his slower pace, his physical stature, and his charm.

I just read that the book is getting a second printing so it should be back on shelves soon. I think #22 is already out. I'll have to go check.

Thanks to Nico for the recommendation. He is two for two. (The Walking Dead is the other comic he turned me on to, many years ago.)
Posted by Emerson M at 1:56 AM