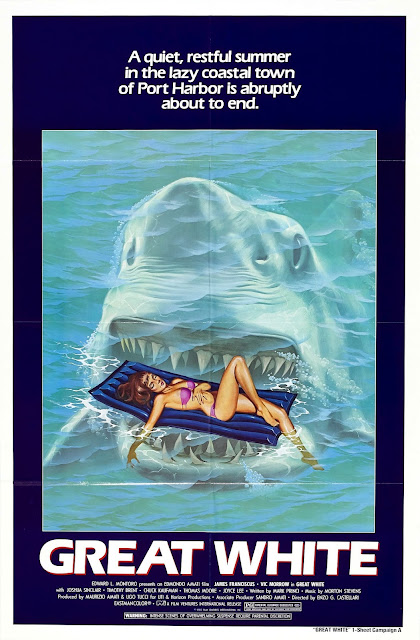 Great White.
A decent ripoff of Jaws. If Spielberg's Jaws robot had functioned as it was supposed to, his film might look closer to Great White. Which would have been a bad thing.
The film was released in the U.S. in 1982 but was quickly pulled when Spielberg got wind. It follows the Jaws storyline so closesly that there is no real argument that Great White is a pretender.
The Italian title is L'ultimo squalo, or The Last Shark. You may find it under that title.
Vic Morrow hams the hell up, as an Irish shark hunter of sorts. The main guy's daughter gets messed up by the shark and after a torrential scene in the hospital, she is quickly and confusingly forgotten.
There is a trailer/TV commercial on YouTube which cannot be embedded, the narrator says the film is rated PG. If this is bonafide, I suspect the U.S. release was edited quite a bit. You're not going to lose your lunch, but the shark does use its teeth to bite people.


Poster courtesy of Wrong Side of the Art.
Posted by Emerson M at 10:43 AM