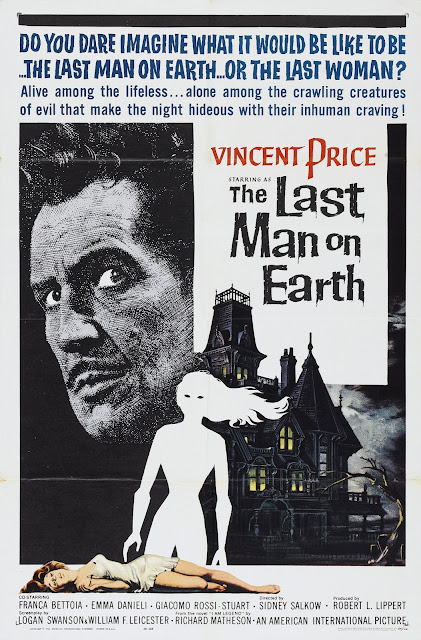 The Last Man on Earth.
Released forty eight years ago, today, March 8, 1964.
Fantastic film. If you are in one of those 'I'm in the mood for a good, older, scary flick,' But you've seen all the classics. You're looking for something with a bit of a quicker pace. Something that has some bite to it. A film that will actually give you a bit of a fright. This is that film.
The story is based off of Richard Matheson's story, I Am Legend. The film is also a strong influence on George Romero's Night of the Living Dead.
Vincent Price is excellent and I believe he considered this one of his finest performances. His emotion makes a lot of this film work.
I'm not going to post the trailer. It's spoilerish and will ruin some good stuff. Just go see it.
Rumors continue to swirl about Warner Brothers shooting another installment to the Will Smith, I Am Legend 2007 film. I really believe that film is a perfect example of CG killing a film. The creatures were ridiculous looking and the explosions and CG were distracting and pointless.
See The Last Man on Earth.
Poster courtesy of Wrong Side of the Art.
Posted by Emerson M at 3:36 PM

Email ThisBlogThis!Share to TwitterShare to FacebookShare to Pinterest
Labels: I Am Legend, Night of the Living Dead, The Last Man on Earth, vincent price