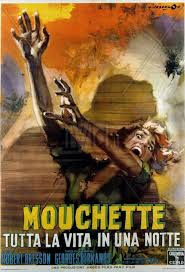 A rather dramatic poster for a somewhat subdued film. Mouchette opened 45 years ago, today in Paris, March 28, 1967.

I've wondered why there are not more critical analysis' of Robert Bresson's films. When I started thinking about writing this post, I got it. Sure you can write chronolgically about the story. You can talk about his insistence on using non-actors to play the roles. You can dissect Bresson's religious themes (I love that he said in an interview "There are no real atheists." I firmly believe the opposite. HA.) You can look at his long shots. The breathless, muted acting. You can break down a film by Bresson and then you can look at it's lifeless husk.

I will risk laying this on Bresson: Like religion, too delicate to analyze, Bresson's films are most effective when they are felt.

If you piecemeal out all the aspects of his films, the greatness crumbles. I once read that Bresson is the filmmaker mentioned most often by film school graduates, but least seen. I can't imagine Bresson's films in the context of film school. Not to say that Bresson's films have poor ligthing, acting, direction, sets, costumes, writing, theme, music, but if you break out a scorecard, his films would not rate so high. The means most certainly do not make up the ends.

Some critics may call this a cop-out. How else are you going to score Mouchette on Rotten Tomatoes? Or on Amazon.com? Or on IMDB? It must be quantified!  I feel like rating Bresson's films is a pointless and insulting endeavor. Films, music, art, writing, of this nature require dialog, not point values.

That all being said, let me tell you a little about Mouchette.
Mouchette is a 14 year old girl. The universe seems to hate her. Bresson is so very careful to not show us what Mouchette is thinking. We can only imprint upon her.
Mouchette's only happiness comes when she is on a bumper car ride. Hitting and being hit makes her laugh. It is at once confusing and perfect.

The film is unfair, painful, and yet known and familiar. You know Mouchette. Perhaps you are Mouchette. When I watch the film, I feel a complete sadness, but skirt depression. Mouchette is too real to be depressed about, there is no "what if?" The story of Mouchette is in the newspapers every single day. It is the sadness that we all know, we all feel, we all stifle and carry on.
Unless we are in the middle of such a situation, specifically, it is too small to carry with us. Culturally, it is too big to think about.

Find and watch the film. Mouchette is one of Bresson's most watchable films.

The video below is an amazing piece. The interviews each carry fantastic points from Bresson's "modeles" (not actors) and Bresson himself. The behind the scenes footage is fascinating for Bresson fans. Seeing Nadine Nortier, the girl who plays Mouchette, smile and rebuke the interviewer's generic questions is charming and confusing.

Here is a photo from the set. 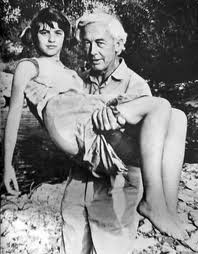