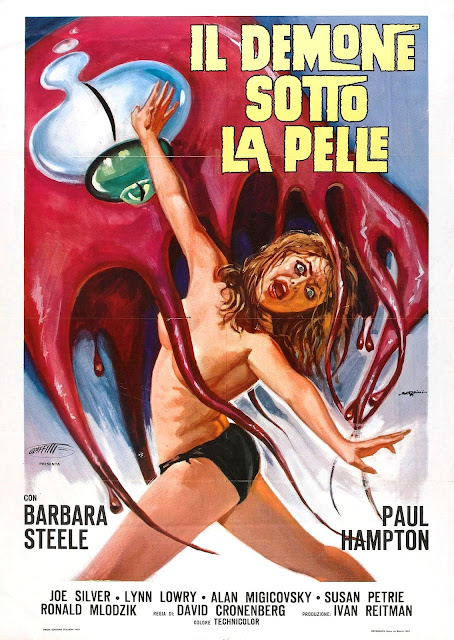 Shivers.
Happy birthday, David Cronenberg.
Wikipedia has a funny story about the aftermath of the film:


The Canadian journalist Robert Fulford, writing as "Marshall Delaney", decried the content of Shivers in the pages of the national magazine Saturday Night. Since Cronenberg's film was partially financed by the taxpayer-funded Canadian Film Development Corporation (later known as Telefilm Canada), Fulford headlined the article "You Should Know How Bad This Movie Is, You Paid For It." He called it "crammed with blood, violence and depraved sex" and "the most repulsive movie I've ever seen."
Not only did this high profile attack make it more difficult for Cronenberg to obtain funding for his subsequent movies, but Cronenberg later said Fulford's article also resulted in him being kicked out of his apartment in Toronto due to his landlord's inclusion of a "morality clause" in the lease.