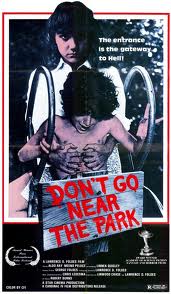 Don't Go Near the Park.
This poster is just so wrong that it's right. I love it.
What starts out as a hot blooded horror pic turns into a made for TV looking double dose of Ambien. It commits the gravest of cinema crimes, it is boring. The end picks up a bit, but it's far too late. This thing was released in 1981 but looks like a film from the early seventies.
A brother and sister need to eat flesh in order to stay young. Some sort of ritual with a virgin needs to be committed to kill the curse. They live for thousands of years. The brother actually marries a lady and has a daughter that he dotes over until the day when he can sacrifice her and lift the curse. The ending has the teenage daughter and her boyfriend walking around town with a little boy who looks like the kid from the 80's show, The Voyagers. The young boy has no shirt on for some reason. Whatever.
It's got Linnea Quigley, so if you need to see every one of her films, you can check it out for that.
Gory, boring, then bloody, then confusing. Not worth your valuable time.