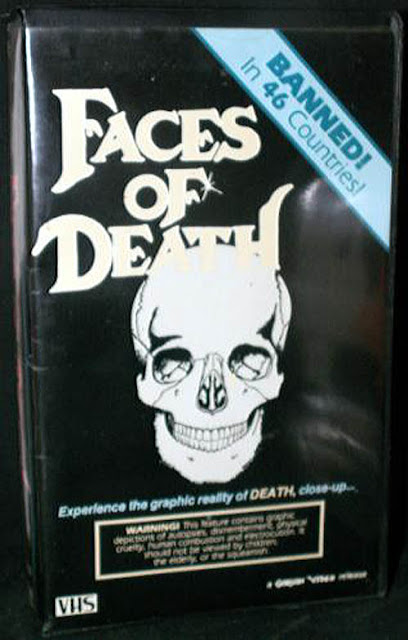 That box cover scared the hell out of me for many years.
The Faces of Death concept is still horrifying to many. Reputation alone keeps this series alive. It would take thirty seconds of online searching to yield videos a hundred times worse than anything in the Faces of Death series. The films cannot stand on their own, their reputation holds them up.
Deadspin.com has an interesting article with the man responsible for the series, John Alan Schwartz. The article is HERE. As anyone who has the intestinal fortitude to sit down and watch these films, most of the deaths are staged. Some more effective than others.
For me, the films were fantastic lessons in stage makeup and effective filmmaking. I saw them in 1987 and they hit me much the way The Blair Witch hit audiences twelve years later.  None of this is real. Wait. Wow. Hold on. This isn't real... is it? That cop's hair is kind of long, this can't be real? When he was falling, he moved, that's no dummy! Wait, maybe it is? Now, I know that IS real. Wait. HOW DID THEY DO THAT?
Four Faces of Death films were made. A best of collection was released between number three and four. Part Five and Part Six use footage from the first four, there is no new footage. The first three films are hosted by the ever-calm but not deadpan, Dr. Gröss (actor, Michael Carr.)


With a narrator in the guise of a doctor, the film brought the audience a string of vignettes of death, both real and fake ones. The device allowed the film to easily introduce footage too shocking for a normal movie. It wasn't every day that a movie went into an operating room to show heart surgery in which the heart started beating. Or captured a motorcyclist getting broken down to limb pieces by a tractor trailer.

Some of the footage—napalm in Vietnam, seals being clubbed—was real. The media had shown death, after all. Schwartz says about half of the material was his own fabrication, though: faked images of death to haunt the living.

That Schwartz anticipated this was remarkable. Even more remarkable, in retrospect, is the outrage he drew from a world that hadn't seen it coming.

"There was an innocence about this back then," he says.

The article is rather interesting. Probably more interesting for folks who have not been interested in the films.
Justifying the basest of human interests is usually uncomfortable and disingenuous. I'm not sure why teenage boys are attracted to seeing these kinds of things. I was, and I'm really not sure why.
When I tried to go back and watch the Faces fo Death films again in my early twenties, with my buddy Nik, we had to turn the VHS off. We had no interest. We were over it.
I still love slasher films from the 70's and 80's, but real and perceived real death footage is completely off my search engine.
The whole teenage immortality angle is tired, but it may be correct. Perhaps you need to know someone one minute and lose them the next to realize how sad, pointless, and horrible death is. Anyway, the article is interesting. Go read it.
(I got the pic of the box cover from Amazon.com, not sure who posted it there.)

Email ThisBlogThis!Share to TwitterShare to FacebookShare to Pinterest
Labels: Faces of Death