Daily poster: Bride of the Monster. 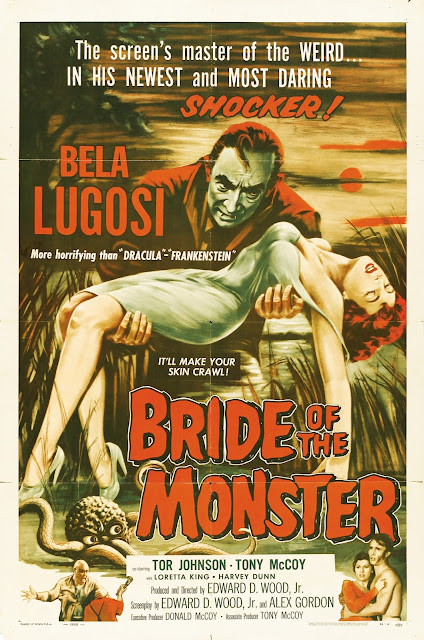 Bride of the Monster.
"He tampered in God's domain."
A classic poster from a classic Ed Wood Jr. film.
Bride of the Monster is considered schlocky, cheap, and poorly executed by many, but if you enjoy wallowing in the darker side of film history, like I do, the film is pretty darn good. It is not boring. Bela Lugosi and Tor Johnson are both fun to watch.
I have read so much about Ed Wood's films and history that when I watch them, I sometimes lose reality. It's just hard to imagine that Bela Lugosi was a real man. That Ed Wood was a real person.
Seeing Tim Burton's Ed Wood biopic before watching Bride of the Monster might be a good way to get yourself revved up for Ed Wood's unique filmmaking style.
The film premiered in Hollywood on May 11, 1955. It opened to the public in February 1956. I cannot find an exact date.
I believe the film is in the public domain, there are a few different DVD versions. The entire film has been uploaded to YouTube by a couple of different folks. I do not know which version has the cleanest copy. I have an old VHS taped from a public television marathon. However you find it, it is entertaining as hell.
Here is the trailer: