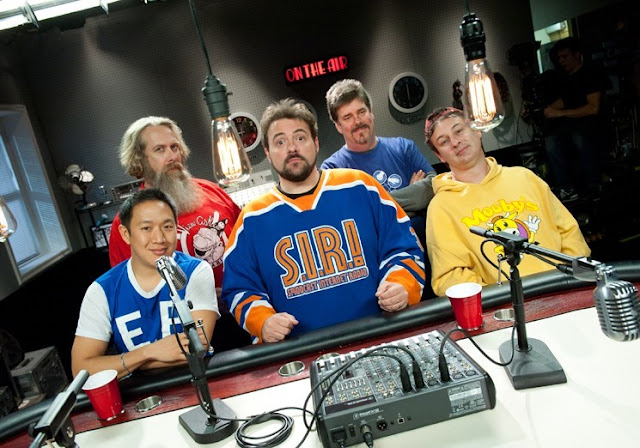 I like Kevin Smith.
I like his films. I love Mallrats.
I like his stand up/speaking tour talks.
I think he's funny.
I collect and read comic books. After weeks of everyone who knows this about me, asking if I would be watching Kevin Smith's new television series, Comic Book Men, the show finally premiered last night.
It was terrible.
Kevin Smith owns a comic book shop, Jay and Silent Bob's Secret Stash. The shop has become a sort of nerd mecca. The show follows the shop's three employees and one constant loiterer. It plays as if the shop, and all the zany things that happen there, are recorded for a period of time. Then the gang meets up with Kevin Smith and they talk about the events of the week in a sound booth. They also crack some tired nerd jokes.
I am a nerd. As I said earlier, I read comics. I play table top role playing games. I could be called a dork. I noticed when Kevin Smith called Kirby Krackle, "Kirby Dots."
One thing I hate in my community is smug nerds. The nerds so picked on by the world that they turn around and crush the smallest thing they can find around them, other nerds. These are the gentlemen (usually they carry a penis) who do not laugh AT Comic Book Guy on The Simpsons, they laugh WITH him. This show is filled to the brim with them.
No one is likeable in Comic Book Men. They are horrible to each other and shitty to their "customers." (I'll get to the "customers" in a second.) There is one decent fellow in the show, Ming, and his likeability slips away when you realize he's only decent because he can't keep up with the silver tongued devils that surround him. He's at the bottom of the totem pole. It should be interesting when someone slower and further down the nerd chain comes into the store.
As for customers. There were none. One employee even comments on this. There were NO customers in the shop, the entire episode. A handful of people did come by to sell items and be belittled. Only two of them actually had comic books.
One customer had a Dawn of the Dead poster and set of lobby cards. They asked him what he wanted for them and he asked for $1,000 for the set. Taking ideas from Pawn Stars and other "reality" shows, the Comic Book Men call in an expert to evaluate the items. I can't remember the expert's name but not only is he presented as a completely horrible person, the crew brags about how horrible he treats their customer. Later, when Ming is trying to sell an entire table of merchandise (sans some plates one of his co-workers smashed. This was such and embarrassing act that the only hero of the show is the old man who takes the asshole to task.) the expert shows up at the flea market and actually haggles and bullies Ming to cut the price for the entire table of merchandise from $25 to $22. Whether it's the truth, filming the worst moments, biased editing, the guy taking on a characterization, whatever, the man is petty and vile.
The manager of the shop, Walt, almost has some sympathetic moments in the episode. When he sees some of the items people bring in for sale, his eyes light up. You can see why he runs a mecca of nerdery. Invariably he tries to flip his cool switch on, and he becomes a nerd douche. His jokes are so very tired. They are the jokes told by 99% of the interviews from the floors of comic book conventions and other gatherings of nerds. No girls in here. Still living in mom's basement. Ugh.
The greatest sin that the show commits is a crime against the basic art of television and film production. Unless you're My Dinner with Andre (and Kevin Smith could ALMOST pull this off, the dude is so engaging) DON'T JUST TALK ABOUT IT, SHOW IT. Two short conversations stand out. The cover of Green Lantern/Green Arrow #85, with Green Arrow's ward, Speedy, revealed as a heroin addict. The other is the conversation describing Kirby Krackle. In neither case do they show what they are talking about. Sure the majority of the audience have seen these things, but this is basic television production. A horrible choice.
The sad thing is that I will watch Comic Book Men again. It's hard for me to believe these guys are actually the horrible people that the first episode makes them out to be. Maybe they are finding out who their "reality" TV characters are going to be. I don't know. I'm going to hang on as long as I can stand it.
Here's the cover to Green Lantern/Green Arrow #85 and some Kirby Krackle. 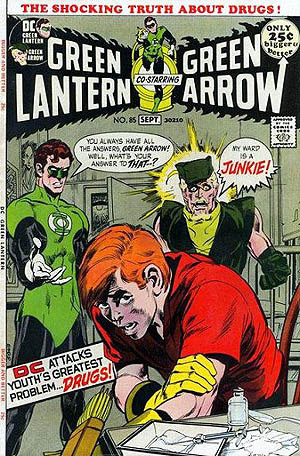 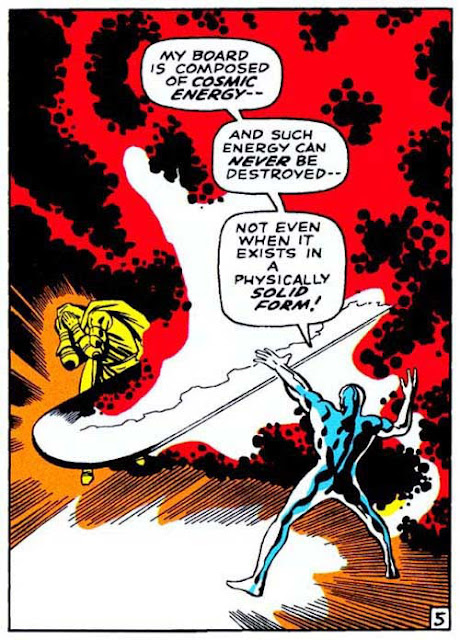