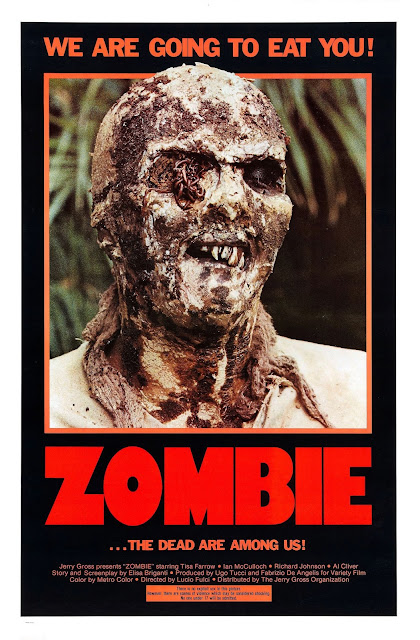 I couldn't stop staring at the VHS cover of Zombie as a kid. They rented the video at Long's Drugs, just down the street from where I now live. I covered my eye with worms in imitation and I wondered what kind of dufus had those teeth when he was alive?
Lucio Fulci's Zombie is heralded as a classic of the genre. A gore soaked masterpiece. I diligently bought the cleaned up Anchor Bay VHS in 1998, but honestly only watched it a few times. I honestly find Zombie to be an overrated stinker.
A couple of weeks ago, I found a torrent called Zombie Rezombified. The description read:


The origin of this particular project actually pre-dates the ongoing 21st century phenomenon of the non-Star Wars fan-edit, as co-editor ThomasJarvis initially conceived of the idea back in the early 90's and actually completed an edited-on-the-fly rough-draft version using a Mom & Pop rental store copy of the Wizard "big box" release, a blank VHS cassette and two VCR hooked together for dubbing purposes.
The key intention (and successfully accomplished ambition) was to reorganize the film into a Greek tragedy of sorts in three acts - act one: the island section, act two: the Manhattan section; and act three: the apocalyptic conclusion wherein the divergent story threads from acts one and two converge together for the film's fiery climax.
So many changes were made that only a truly devoted fan of the film will be able to pick out the vast majority.
These edits range the scale of subtle and barely detectable to major and substantially film-altering (with everything between).
Cult film fanatics the world over will be pleased to note the desperately needed omission of the much-maligned, extremely over-the-top & Hayden Christianson-like howl of "arrrgghh!!!" by the radio announcer at the film's conclusion.


2. Zombie is hailed as a classic, by some. What is your response to those that ask, 'How dare you mess with this masterpiece?'
My response would be, with that kind of thinking we would never have gotten such highly-regarded fan-edits as Adywan's infamous 'Star Wars Episode IV: Revisited', which many regard as even superior in various ways to the officialy-released Special Editions! Now, if someone were to say to me, "that's' completely different. Adywan did not fundamentally alter the structure, chronology or mood of the film in question!"...Well, to that I would say, take a look at the grindhouse edit of 'A New Hope' called 'War of the Stars', or the grindhouse-ification of 'Jaws' called "The Sharksploitation Edit". Those are very enjoyable edits in my personal estimation, and the fan-editing community is enhanced by their very existence. Yet, few would dare argue against the notion that 'Star Wars' and 'Jaws' far exceed the reputation of a film like 'Zombie' in terms of being a modern cinematic classic. It should also be pointed out, that the goal of a true fan-edit is quite often NOT to outdo the source material, but rather to be an alternate, or experimental take on that same material. Fan-edits should rarely be judged upon the basis of rather or not they are superior to their original films, but rather they should be judged by how effective they are as stand-alone companion pieces to the original films.

4. Was there anything you couldn't do that you wished you could have?
There might be a couple things. Someone commenting on our edit happened to mention a sort of continuity error he noticed in Fulci's original cut, wherein the shark-zombie is missing part of his arm in one shot, then magically his arm is whole again in a later shot. I had never noticed this before, and wasn't made aware of it until after our fan-edit was already completed and unleashed upon the world! It's not our mistake, its Fulci's, its present in the original commercial release, but now that I know about it, I wish we could've done something about it while we were knee-deep in the thick of editing.
Also, I still sort of fancy the notion of adding 'Pulp Fiction' style title cards to separate Acts I, II, and III. Tiis is just my own quirky idea, however, its not something that my editing partner (or anyone else for that matter) has really warmed up to, and it was more of just a whimsical "what if" sort of thing on my behalf anyways, so it certainly wasn't a deal-breaker and was no big loss. Now that a domestic blu-ray has been released, its possible we might revisit the edit at some point, so who knows what changes we might decide to make when and if a new edit comes to fruition.

5. What is the edit that you are most pleased with, the one that makes you rub your belly and smile with satisfaction?
For me, there are quite a few that I could say that about; but if I had to pick one, it would be the scene in which the doctor shoots a resurrected cadaver encased in a body bag. Not the scene that opens the film in which he has to shoot his friend that is also flashbacked to later in the movie, but a similar scene in which he shoots one of the natives. In Fulci's original version, just at the point where you see the bullet impact with the head of the body-bag, the shot cuts away to more Manhattan footage. The next time the movie cuts back to island footage, the very first shot is of the same body bag, in the exact same placement within camera frame, showing blood leaking out of the wound from the pistol blast. In our version, since all of the island scenes taking place before the Manhattanites arrive have been reshuffled and joined together during the first act, its really neat how the two different shots merge together to look like one impact shot. In other words, as soon as the pistol fires upon the body, you immediately see the blood leaking out of the wound. And the the two shots merge together so perfectly, that it comes across like an intentional series of shots depicting the impact of a gun blast, it really feels to me as if it was originally intended to be edited this way. I love that cut, it just feels "right" to me! Interestingly, this particular edit was actually present on the old VHS cut, so I guess I had some at least semi-decent editing ideas way back in my late teen years!
As for Dave, there's a cut in our edit that he deserves total credit for, and I would imagine that this might be his favorite cut, and its certainly one of my favorites as well. Its during the underwater shark sequence. In the original commercial release, from the time the topless scuba-diver jumps into the ocean until her last moments underwater before she is pulled back aboard the boat, all this underwater footage is intercut with goofy character exposition scenes between the characters on the boat, and there might even be some scenes taking place on the island with the doctor and the natives, not sure (its been awhile since I've watched the original commercial release). So on the old VHS edit that I did back in the early 90's, I merged all of the underwater sequences together, and moved the non-underwater scenes that were originally interspersed throughout, to other appropriate moments in the film.
But there was one transition between two of the underwater scenes that I was never truly happy with on the VHS edit. I cut on what I thought was the only moment that could possibly work as an appropriate transition point, which was on a shot of a school of fish, because it seemed to be the last possible moment from that particular bit of footage wherein the camera remained stationary enough to serve as a decent cut-away shot. But, the music changed significantly between the last camera shot on the school of fish and the next underwater shot of the girl swimming, so the cut just came across as awkward and unnatural. But Dave took a look at it, and somehow discovered a different way to cut the scene, he might've done a dissolve effect, I do not recall at the moment, but somehow he discovered a truly ingenious way to merge those two underwater shots together in a way that is virtually seamless, and its awesome! He was quite happy with the result, and so was I. Sometimes there's a kind of magic that happens when you are working with an equal partner-in-crime on these things, that would simply never happen if you were to be doing it all on your own.

Wow, thanks to the gents at SubStream Studios for their fine work. I would love to see a re-edit of Friday the 13th IV. Now, get your booty out there and find Zombie Rezombified.