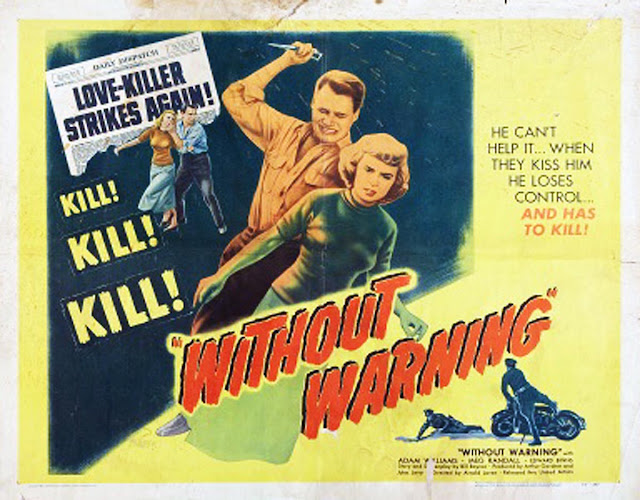 Without Warning.
Happy 60th birthday! Without Warning opened on May 8, 1952.
Without Warning is, on it's surface, a film noir. However, I believe the film to be much more; I feel comfortable labeling Without Warning as a proto-slasher film.
Sure it has all the police procedures on display; the authoritative voice over; and the chase scene at the end has cops on the tail of the killer. However, the murders are more brutal; the police are not the protagonists of the film; there are no whodunnit or mystery aspects; there is no organized crime element; the killer fits the Psycho, Peeping Tom, and many other later slasher film molds in both personality and murderous techniques.
The film has a slasheriffic pace and the killer is just plain creepy. He is a Los Angeles gardener who had his heart broken by his blond wife. Something ripped in his mind and he kills blond ladies. Simple enough.
If you love a good slasher or are a film noir freak, but you're looking for something a little outside the box, Without Warning is a pretty good choice.
I can't find a trailer for the film, so enjoy this clip.