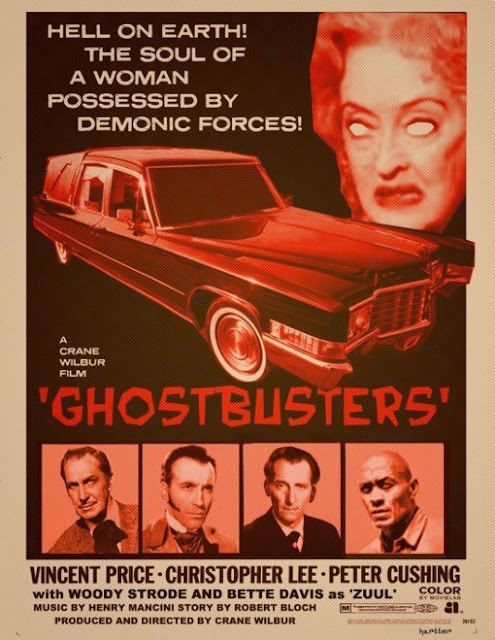 A couple of days ago I posted a retro-phony baloney poster for Ghostbusters. I attributed Hartter as the artist. I was wrong. Another artist had swiped his concepts.

I went to Hartter's site and was amazed at the breadth of his projects. He's got a great eye for creating retro posters and a unique art style for creating wholly original pieces.
I tried to grab a few of my favorites and ended up saving over twenty pics. Just get your booty over to his site and check it out, HERE.
Thanks to Hartter for this short notice interview.
1. I blew it and posted some other fellow's work with your name. Sounds like a lot of people made the mistake. What went down?
Another artist did an alternate universe movie poster gallery, In that gallery and elsewhere online, he had directly swiped two of my poster concepts, pictures and all. The first poster is Ghostbusters starring Peter Cushing, Christopher Lee, Vincent  Price and Woody Strode. The second poster is the Matrix starring Bruce Lee, Sidney Poitier, Peter Sellers and Pam Grier. 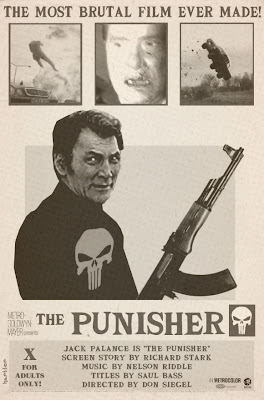 The artist, Peter Stults, apologized to me a number of times and took the two posters down from his site and credited me with the idea, but not before the images were spread to a number of websites that he has no control over. It just got away from him, he never thought anything would come of it and definitely didn't think I'd ever see them. I don't have any ill will towards him. I'm sure he's going to still make new posters. That's cool. More power to him. We're different styles anyways, I'm more of a wonky 60's and 70's exploitation poster guy. Anyone can use the images and ideas we both used, but my point is, with limitless resources available to you in the modern age as an artist, why on earth would you exactly mimic someone else's interpretation of  a concept?  There's more than enough unused ideas floating around. Ideas are all that an artist has. That's why I got so protective of those posters when I saw someone else directly ripping them. 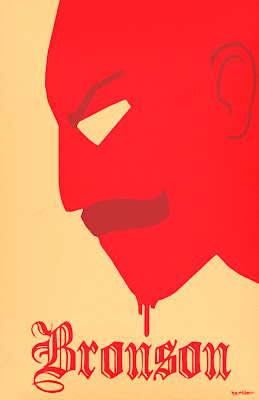 2. It seems you have an equal number of completely original poster designs and retro mash-ups. Talk about your process in creating each?I don't use other posters or layouts wholesale. I'll take a "WIDESCREEN" or "IN COLOR" logo or maybe a tagline of an old poster, but that's about it. I have like 20,000 fonts so I like picking and choosing those. I'm just goofing around really. I hand draw, I do photomanipulations, I do almost construction paper cutout type art in Photoshop.. I do all kinds of stuff. On some projects I veer away from using any pre-existing materials to compose, and for other projects I just comb the internet and do pastiches of things I find, and that becomes its own self sustained concept. To me anyways. It worked for Andy Warhol.


3. The number of images and projects you have on your site is staggering. How did you get into this?
I've been drawing my whole life and have loved old VHS covers, LP covers, posters, postcards and the like my entire life, too. It wasn't until the early 2000's that I started working for newspapers and magazines, doing everything from movie reviews to political art, short comic book stories and pinups for indie comics. I exclusively did hand drawn stuff until maybe 2007, when I first started tinkering with mashing photos and things together. I try and do all kinds of art I'm capable of equally now. Both fortunately and unfortunately I have had a little more time on my hands the past few years, I have leukemia and its made me sick enough to where I can't work a regular job job like I have for 20 years. No one knows how much time they have, so why not maximize that time doing thing you love as much as possible. 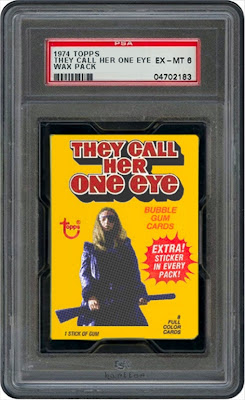 4. Do you collect film posters?
You'd think that I do, but I only have a couple posters, an original 27" x 40" of Tim Burton's "Batman", a "The Texas Chainsaw Massacre" one and a reprint of Alex Ross' "Battle Of The Planets". My son has a killer 27" x 40" "the Spirit" drawn by Frank Miller. Our favorite comic book artist. 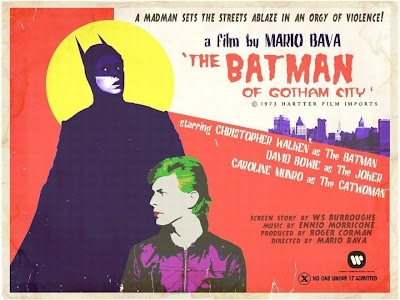 5. If you were asked by the Smithsonian to contribute one of your poster designs for a big show, which one would you choose? Why?
I'd say maybe my fake Mario Bava's "The Batman Of Gotham City" one. Its the one thing people have responded to the most and it looks like a genuine old poster, it even fooled Batman artist Jerry Bingham. He posted it and asked why he'd never heard of the film before. I thought that was cool. 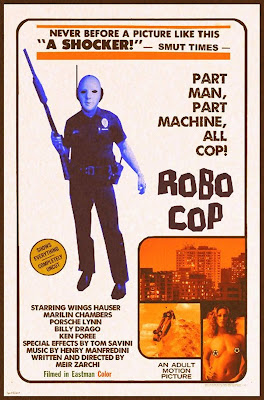 6. What is your favorite possession?
My book collection. My trade paperback collection? Or my movie collection. I read a lot and watch a lot of movies. Actually right now it could be the Boba Fett bobblehead my boys got me for Christmas. Yeah probably that. 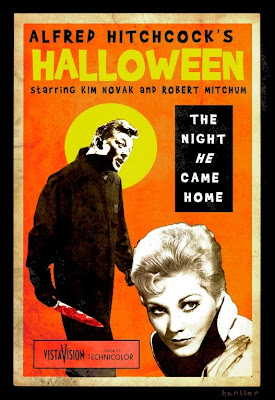 7. Can you talk specifically about the tools you use?
When hand drawing I use pencils, copy paper and thin point Sharpies. I have a tablet but rarely use it. I do all my coloring and photo based art in Photoshop cs3.

8. Which of your poster have been printed and where can we get our dirty mitts on them?
I briefly sold posters out of my home but a) I was legally advised not to and b) with my health issues I really couldn't keep up with demand. I have a CafePress t-shirt store. Generally I do commissions and send them to the client digitally for them to print up or use however they are going to use them. 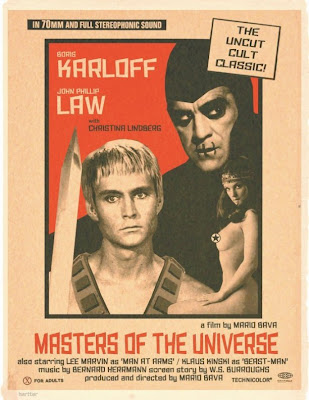 9. What are you working on now?
I'm working on some e-book covers for author Nancy A. Collins. I work all the time with horror auteur Hart Fisher and do weekly commercial bumper art for the Saturday Fright Special syndicated TV show. I've done that for two and a half years and I love those guys. I'm also a regular contributor to the website Retroist. They let me submit whatever I want, which is great, and I have collaborations with authors like Daniel Th1rte3n. I did a teaser poster for Scorpio Film Releasing and their upcoming film "Murder University". I'll do the final one sheet when its time to. Similarly I composed a handful of teaser posters for horror director Dante Tomaselli's film "Torture Chamber". I have a massive secret project I've been working on for three weeks but I literally can't say anything about it. It comes out very soon though.


Thanks again to Hartter for answering my questions. Here are a few more of his fantastical pieces. 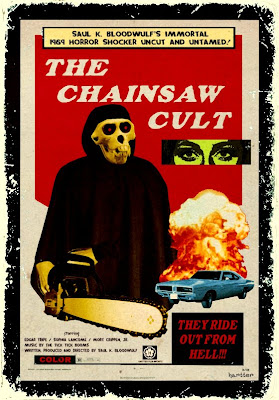 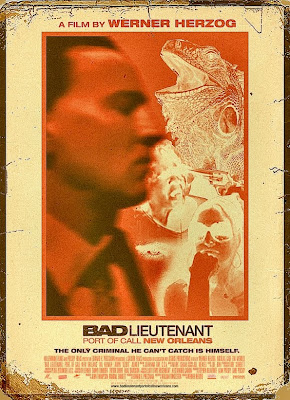 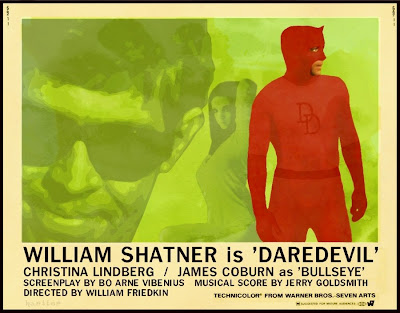