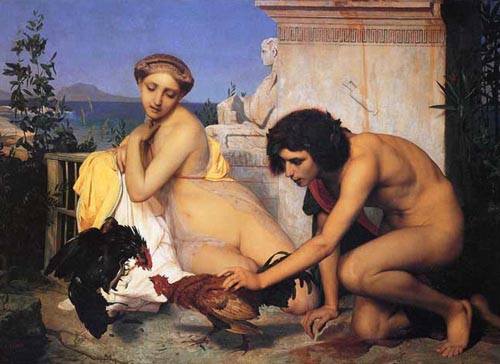 Salon.com posted THIS interesting article by Deborah Kennedy, Why Cockfighting Persists. The article it is a great insight into the current state of affairs in the cockfighting world.
I have been fascinated by the cockfighting world since I saw the film Cockfighter about ten years ago. I am not pro-cockfighting, but the questions it brings up are intensely interesting. Concepts of tradition and culture; government inserting itself into out lives; the hypocritical way we view the rights of animals.


Back to the chickens. What about the fact that we simply don’t treat them very nicely, even when we’re not turning them into feathered gladiators? All it takes is one viewing of “Food, Inc.” or a similar documentary to see that most male chicks are chucked into a shredder before they can see the light of day, and that the majority of hens are bred to be so fat they can’t walk. Companies like Tyson and Perdue have a stranglehold on the chicken industry, mandating that farmers keep their poultry in smelly, dark houses so packed with animals that many are crushed to death by the weight of their own kind. Even the lucky 1 percent, free range chickens, are headed for our dinner tables. What’s so bad about raising a rooster to fight to the death, especially when the ones found still alive at busted cockfights are often euthanized anyway?
“I treated my chickens like kings,” Bo said. “I fed them well, I made sure they wanted for nothing. They were loved. These animal rights people, the Humane Society, what they want to do is get rid of the breeds. That’s what they want to do. This isn’t about the chickens or their rights. It’s about the government overstepping its power.”
Bo then referred me to the November 2011 newsletter from the American Game Fowl Society in which an unnamed writer makes the argument that the Humane Society of the United States bullies people into pleading guilty to charges of cockfighting when really all the HSUS has in its arsenal is circumstantial evidence. The newsletter mentions a raid in Greenville, S.C., where, the writer asserts, the real criminals were not the cockers but the Humane Society personnel who, having taken possession of the game fowl, stacked them 10-feet high in boxes with no ventilation and left them to die of heat exposure while they treated people on the scene to full-body searches. The article even mentions Goodwin by name, and claims that because he is not a law enforcement officer, he has no right to act as one. Also, that “these chicken people were never Mirandarised.”

I'm not sure what video they were watching but HERE is one from raids in Greenville, South Carolina. Embedding was disabled, click it. It's a news story and not too gory.
Here is another one put out by the Humane Society. It is a bit more gory and has emotional music. The Humane Society members are also pretty cuddly with the roosters in front of the press, but my understanding is that all collected roosters are killed.