This film is from the dying days of the NWF, in Cleveland. Ox Baker heart punches Ernie Ladd over and over. Why would this cause a riot?
Ox's heart punch was lethal. Wrestlers died after receiving Ox Baker's finishing move, that's why people rioted. They didn't want Ernie Ladd to die.
In June, 1971, Ox Baker was wrestling Albert Torres in a tag-team match. The match ended with Baker heart punching Torres. Torres died three days later.
In August, 1972, Ox heart punched Ray Gunkel. Gunkel died in the locker room after the match.
Ox Baker's finishing move murdered men.
Well, the truth is slippery in wrestling. Nevermind that Torres really died of a ruptured appendix and Gunkel from a heart attack. The story was that Ox Baker was killing men with his lethal heart punch.
The lack of sympathy for the dead and the strength of kayfabe is a bit shocking to most people. In professional wrestling, the show must go on and if the real world is going to try and infiltrate itself into the show (wrestler's dying) and explanation within the storyline will be given (Ox Baker's heart punch.) At that time, if the audience did not believe those men hated each other, there would be no conflict. The would be no drama. There would be no reason to buy a ticket. 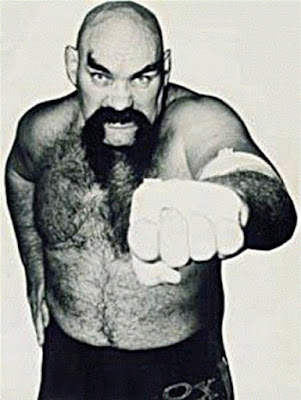 Wrestlers on opposite side of the aisle, good guy babyfaces vs. evil heels, couldn't be seen together outside of the ring. The storylines were played out 24/7.
If you think that is crazy, consider the current state of things. Everyone knows that wrestling is a show. It is sports entertainment now. The public is aware that the outcome is predetermined. Yet, there are more injuries and wrestlers are taking riskier chances to satisfy a public that knows the match is  a show. Fitness is also important. Sure steroids heal injuries, but 90% of steroid use is purely aesthetic. The wrestlers need to look tough.
Ox Baker worked mostly in the late 60's - early 80's. He was a scary looking man. He is 6'5" and as mean looking as an enraged bulldog. He was an amateur wrestler in his youth, but relied on a rough, brawling moveset in his professional career. Ox was in Escape From New York and Jackie Chan's The Big Brawl. His motto was "I love to hurt people."

I met Ox at the Cauliflower Alley Club annual event in 2001. I met him again at WresteReunion in Flordia, in 2005. Ox was a gentleman both times I met him. We also talked for a long time on the phone for my Bruiser Brody book. The old instincts can be strong in Ox, he may still love to hurt people, but if you can break him down, he's a hell of a nice guy. My understanding is that he works as a greeter at Wal Mart; what a great site that must be.