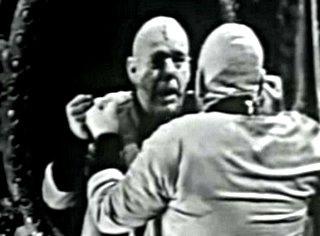 While looking for the Face of the Screaming Werewolf trailer yesterday, I was shocked and super happy to find the entire January 18, 1952 episode of Tales of Tomorrow. The show was sort of a precursor to The Twilight Zone. It was recorded live.
The legendary 16th episode is FRANKENSTEIN, starring Lon Chaney Jr. as the monster.
The reason the show is legendary is that poor old Lon Chaney Jr. showed up drunk and thought the live performance was a dress rehearsal. He halfasses his way through half the show and doesn't smash the breakaway props.
The story is that he had broke several props during rehearsal and felt bad that the crew had to put them back together after each rehearsal. Chaney decided to be a nice guy and go light on the props, thinking they were still rehearsing. He gingerly sets down chairs and while you can't hear it on the video, he muttered "break later."
At the 2:28 mark of the second video he clearly looks off camera and says something to the crew.
At some point someone told Chaney that they were live, and a bit over halfway through the show, he kicks into high gear.
If I hadn't know about the mistake, I would have honestly thought the monster was struggling with himself. Struggling to exert control over his base instinct to destroy. I've read about this performace since I was five years old, and I'm tickled pink to finally see it.


The Internet Archive has the video in one 23-minute chunk HERE. It's also downloadable in a variety of formats.
Posted by Emerson M at 6:16 PM