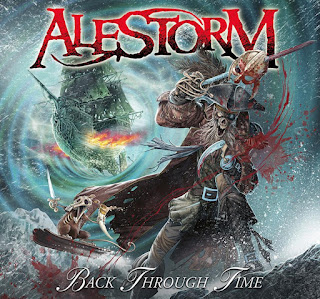 I know, I know. They have a keytar, a little person, pirates are super trendy right now, you just want to punch the lead singer in the face, they just try way to hard, but Alestorm is one of my guilty pleasures.
Alestorm's latest album, Back Through Time, hits American shores today.
I really liked their first two albums and from the looks of things, I'll like this one as well. It's really hard not to start rocking my fist back and forth, in my truck as I listen to Alestorm on my way home from work. HA.

Last night I finished Michael Crichton's pirate novel, Pirate Latitudes. It was a very good, standard, non-magic, pirate story. Everything one could hope for in a pirate tale. Highly recommended to pirateheads.
Also recommended is On Stranger Tides. I haven't seen Pirates of the Carribean IV, but I can attest that the novel is pretty darn good. Pirates, zombies, Haiti, Blackbeard, a cool fantasy-pirate romp. On Stranger Tides used to cost $50+ for a beat up paperback because it was out of print and rather rare. I paid $30-something for a copy with a taped on cover. My buddy, Sean, recently informed me that the book is back in print, ready for your eyeballs at a reasonable price.
If you have any other pirate novel recommendations, please pass them along.