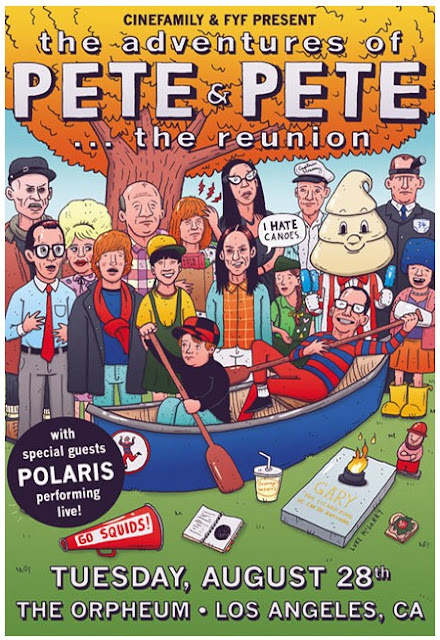 I have to geek out for a minute. I can hardly breathe. So. Excited. So. Jealous.

The blurb says that practically all of Wellsville will be there. I am dripping with jealousy.

Tickets go on sale for Cinefamily members tomorrow, on July 19th (The cheapest membership is $90, ugh. Tickets are $25 and/or $75.) HERE
Tickets for everyone else go on sale HERE on July 21st.

Every generation thinks the kids stuff they grew up with is best ever made–and those of us who grew up with Pete and Pete may actually be right.

While it only lasted three seasons (1993-1996), The Adventures of Pete and Pete imprinted a generation with its magical and moving mixture of mystery, sweetness, strangeness, and humor — how we remember childhood at its best. As Cinefamily’s Everything is Festival comes to a close, and FYF Fest begins, we are excited to unite our powers for good and bring to you the Ultimate Pete and Pete Reunion to end all Pete and Pete reunion shows. We’ll assemble on one stage virtually the entire population of Wellsville (from its creators to its residents), to wax nostalgic about the quintessential show about nostalgia, to explicate inside jokes, to deconstruct the immaculate mechanism behind the show’s making, and to have a great time. We’ll be flashing Petunia tattoos, eating Mr. Tastee ice cream, getting “loaded” on Orange Lazarus, and, for the first and (maybe) last time in history, listening to our favorite songs live from the band POLARIS — who are reuniting for this special show. This is Woodstock for Kreb Scouts, kiddies, and you’ll wanna say you were there (or you’ll be lying about it later, anyways.) Clear your calendar. Get on a plane. Evade the International Adult Conspiracy. Just don’t be a jerkweed, and do what it takes, cause you don’t wanna miss this show!

Email ThisBlogThis!Share to TwitterShare to FacebookShare to Pinterest
Labels: Pete and Pete, reunion